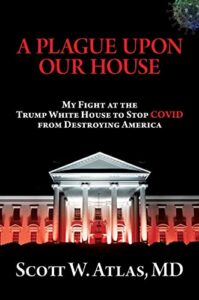 When I decided to read Scott Atlas’ book, A Plague Upon Our House, I had no idea how shocked and disillusioned I would become. I already knew from the excellent posts on Ricochet that our government’s strategies for understanding and managing the virus were a disaster, but I have every reason to believe that Dr. Atlas’ descriptions of the events during his service at the White House are true.

And it was a tragedy.

So why was Atlas brought on board to advise the president? His credentials are substantial, although in its usual frenzy to discount anyone associated with President Trump, the media harped on his long-ago work as a radiologist and that he wasn’t an epidemiologist. He was also a highly respected colleague of Dr. Jay Battacharya from Stanford, who has appeared many times in Ricochet forums and also been tarred and feathered by the media (which earns him high esteem from me).

Dr. Atlas did not initially want to go to the White House to be a senior advisor, but felt an obligation to help the President and the country with this viral crisis. He wasn’t politically motivated, but sought to bring the truth to all parties who would be affected. After a comprehensive and ongoing review of the data, Dr. Atlas repeatedly emphasized the implementation of certain key points:

My main points were that targeted protection made sense, not broad lockdowns, especially given that the elderly harbored a far higher risk than younger, healthier people; that children had an extremely low risk; and that the lockdowns and school closures were already enormously harmful.

And although nearly everyone ignored or refused to implement his advice, he was consistent in sharing it. And he was right.

Atlas determined early on that Deborah Birx was the person who was leading the Task Force. Quite simply, no one was willing to challenge her approaches, her ideas, or her data, including Fauci and Redfield. Except for Atlas. And when he did challenge her, she would interrupt him, argue with him and discount him. Everyone else fell in line at his example (since many had seen her similar behavior in other situations and knew better than to challenge her). In particular, Atlas was alarmed at her simplistic approach to the data:

I chose to avoid explaining her second serious mistake, which derived from a naive reliance on correlation—i.e., believing that a chosen correlation proved causation. This kind of unsophisticated reasoning was frequently demonstrated by the Task Force medical troika as they voiced similarly invalid conclusions about masks and lockdowns in subsequent meetings, conclusions that were so obviously unsound that they were questioned even by the nonscientists around the room.

Atlas finally realized the most important contribution he could make:

While Birx, Fauci, and Redfield focused solely on stopping cases at all costs, in media interviews and in their advice to governors, pushing their brain-numbing message of ‘wash your hands, stay away from others, wear your masks,’ I was the only doctor representing the White House who also explained to the public, providing data in written pieces, in interviews, and through the president’s remarks, that the lockdowns were destroying people. Now I more fully understood the importance of my being there, exactly why I was brought into the White House.

There were several appalling episodes that Atlas experienced: the refusal of participants to engage in open discussion and the lack of studying the data by most of the other medical experts, for two. But I have to admit that my own reaction duplicated Atlas’ with an exchange he had with Fauci, questioning a comment Fauci had made:

I challenged him to clarify his point, because I couldn’t believe my ears. ‘So you think people aren’t frightened enough?’ He said, ‘Yes, they need to be more afraid.’ To me, this was another moment of Kafkaesque absurdity. I replied, ‘I totally disagree. People are paralyzed with fear. Fear is one of the main problems at this point.’ Inside, I was also shocked at his thought process, as such an influential face of the pandemic. Instilling fear in the public is absolutely counter to what a leader in public health should do. To me, it is frankly immoral, although I kept that to myself.

Atlas was continually in a state of perplexity, trying to figure out the motivations and strategies of his colleagues on the COVID Task Force. Why did Jared Kushner keep sending him to Mike Pence when he had concerns? Why didn’t the contradictory information from the President’s speeches and the Task Force representatives cause Mike Pence concern? What were people so afraid of when it came to disagreeing with Deborah Birx? He finally reached some clarity regarding these questions and I found his conclusions credible:

Eventually I figured out the dynamic. Birx obviously was very knowledgeable about two things, regardless of her expertise on the pandemic itself. First, she knew that the VP had her back, often echoing her words. Clearly, he was conscious that the Task Force—which he directed—was the most visible evidence of his own work in the administration. That meant that its perceived positives must be protected—nothing about it that the public viewed as positive would be minimized or criticized. Pence had zero intention of ‘rocking the boat’ with Birx or Fauci, even though he was very receptive to my thoughts and readily agreed with the data I presented. Second, Birx, having been in Washington for decades, understood something else that I certainly did not—how politicians worked. She was fully aware, unlike me, that there was no one who really had the guts to tell the truth to her or to the public. After all, an election was approaching.

When Trump lost the election, Atlas had already decided to return to California. He had gone through quite enough of the media attacks, lies, and distortions. He despised the political environment, and returned home for Thanksgiving without going back to the White House. Since the Task Force was not interested in his expertise and contributions, there was no reason to stick around.

I’ll end my observations about Atlas with one of his most powerful conclusions about COVID-19, the pandemic, and the Task Force:

In the end, the most egregious failure of the Task Force was its complete and utter disregard for the harmful impact of its recommended policies. This was outright immoral, an inexplicable betrayal of their most fundamental duty. I have no doubt it will go down as one of the greatest public health failures in history.