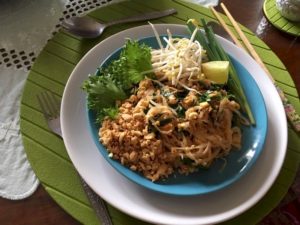 Well, I just went to Amazon.com in search of two-door bypass barn-door hardware (as you do), and the first thing I came across was a huge ad for Ron Howard’s new movie, Thirteen Lives, which tells the story of the Thai soccer team trapped in the flooded cave, one which captured the world’s attention in July of 2018.

Due to my abysmal satellite Internet connection (Hughes) and my subpar cellular data rate (AT&T)–I really do live in something approximating the Bermuda Triangle when it comes to contact with the rest of the world–it’s very difficult for me to stream anything because, buffering, hiccupping, waiting around for hours, and so on.

I’ll look and see if it’s available via any other avenues; otherwise, I’m going to have to go visit a friend or family member, or drive to the Giant Eagle parking lot (the attached strip mall has an AT&T store), and watch it on the iPad in my car.

Because watch it, I will (as Yoda might say).

It’s been a very long time since I’ve been at ground zero of a happening which has captured the attention of the world (it used to happen a lot more often in my early childhood), but there I was. Perhaps I’ve not completely lost the knack.  I hope not, anyway.

In any event, my story has a couple more lives attached to it than does that of the movie.

Early in the morning of July 7, 2018, I landed at tiny Chiang Rai airport, the main concourse of which is about as big as my living room.  Nevertheless, my Gracious Host (GH) and I chased all over looking for each other for about forty-five minutes before finding ourselves and deciding that my luggage (most of which was stuff I’d brought at the request of aforementioned GH, and in order to do which I’d had to ditch half my own stuff and buy a larger suitcase) necessitated taxi travel back to home base.  GH, who’d arrived at the airport on a small motorbike didn’t know his home address, despite having lived at it for approximately nine months, or at least he couldn’t, or wouldn’t,** communicate it to the guy at the taxi stand, so that involved a further wait of about 45 minutes, until GH’s landlord could be reached, so that he could speak, at that point, to the available taxi guy in actual Thai. Ordinarily not a problem, but after a flight which–end to end–comprised 34 hours, I wasn’t in a particularly gracious mood myself when it came to further waiting around.  Still, we made it home, and the subsequently proffered gin and tonic and then a shower (I’m a girl with her priorities straight) made the world look a whole lot brighter.

Since I’d caught my second wind and was determined not to succumb to jet lag (a time difference of +11 hours), we forayed out that evening to the Chiang Rai street fair.  The roads in the central city close for the pedestrian festivities, and (it seems like) hundreds (thousands) of street vendors show up with food and entertainment.  Much fun, much to see, and much to entertain, although I was–as I am even in the US–somewhat leery of meat on a stick.  Perhaps that’s just me.  But the local sausage!  And the pastries!

And the world news media!  They were everywhere.  As I discovered during the next several days, on every foray out to see the sights.  Road blocks.  Traffic jams.  Cameras.  I got to thinking, “Lord, I wonder how long it will be before one or another of my friends in one or another country phones my family to say, “Hey, I just saw “She” on the TV on News at Eleven.  She’s in Thailand.  Did you know?”

Yes, Karen.  Yes, they did.  Thanks for asking.

The details of the rescue were fascinating.  Incredible.  Dangerous.  And they involved a cast of dozens of international caving and diving experts, and a fearless unit of Thai Navy SEALS, one of whom lost his life in the endeavor.

The boys began to be rescued on July 8, and the rescues continued for the next 48 hours.  Thailand, and most of the world, was glued to the story.  Locally, the fascination and the–unusual even for Thailand which specializes in such things–traffic jams were incredible.

Chiang Rai–a city in the North of Thailand–is (relatively) quiet and conservative.  However, even after the boys were rescued and taken to the local hospital, gridlock continued.  I remember going home one evening after (a rather nice) dinner to find that streets were closed in celebration of the rescue and that there really wasn’t any way to “get there from here.”  It was several hours before we made it.

And then there was the completely unexpected visit to the hospital where the boys were housed.  GH had a good friend–a young woman–whose father had suffered a serious medical event and been hospitalized in Chiang Rai at that very hospital.  She was frantic, and asking for blood donors.  GH volunteered.  And since the young lady asked if I’d be willing, I said, sure, I’d open a vein, as I’m a regular blood donor stateside where–they tell me–my blood (O- and very ‘clean,’) goes to neonatal units.

So, off we traipsed to the hospital.  Pandemonium.  Newsies everywhere.  Roads and entrances blocked.  Difficulties (yet again, but for a different reason) hooking up.  But, eventually we got there.

As it turned out, they refused my blood because of my age and because I was past the cut-off limit for “unknowns” who’d never donated.  The same was also true of GH, but he was a little more glib (imagine my surprise), and had the young lady vouching for his prowess, so, oh well.  I gave it my best shot.  She, as Charles Dickens might have said, “was willing.”  For that much, at least.

Crimenutely.  The straits we get into, in life. I don’t guess I’d change a bit of it, no matter the outcome (which is sometimes brutal).  I know what I did.  And why I did it.

And so, here I am, reflecting back on the story of the Thai soccer boys, the just-released movie, how it affected my life, and thinking about a few things.  Such as:

And so I read the reviews of the movie, of an event which happened during a significant time in my life, a time in which I was trying for a bit of relaxation and enjoyment in the midst of monumental family tragedy, and I find that most reviews (as does this one) deem the movie very good, and which praise, above all else,  its realism.

Oh, hahaha.  It can’t be all that realistic if it doesn’t contain at least several minutes of footage of an elderly–graying–formerly red-headed Western woman careening around the highways and back streets of Northern Thailand on the rear of a rather rickety and underpowered motorcycle, being towed around by what history has since revealed was–so he now says–her very Ungracious Host (UG), while she looks quite uncomfortable, apparently wishing that the whole thing might stop.

**Story there: Even before arriving in Chiang Rai, I’d had to phone GH from Bangkok, upon my initial arrival into Thailand, because the POLICE at the airport  (frightening) wouldn’t let me proceed until I gave them the exact address at which I would be staying in country.  Thankfully, GH answered my desperate phone call from the airport.  What I didn’t realize until after the fact was that the address he gave me–which I passed on to the police–of the Condotel in Chiang Rai–wasn’t really where he lived.  Thank God they never checked.

PS: On July 11, GH/UH and I were at the old Chiang Rai airstrip which, these days, is mostly given over to geezers who want to power-walk and jog in the morning before trundling over to the palm-thatched bar and drinking their breakfasts (Heineken with ice if anyone’s interested), when the helicopter carrying the Thai SEAL rescue team landed:

GH very kindly offered to buy them a drink.  They–equally kindly–refused, because “still on duty.”  Brave men all. 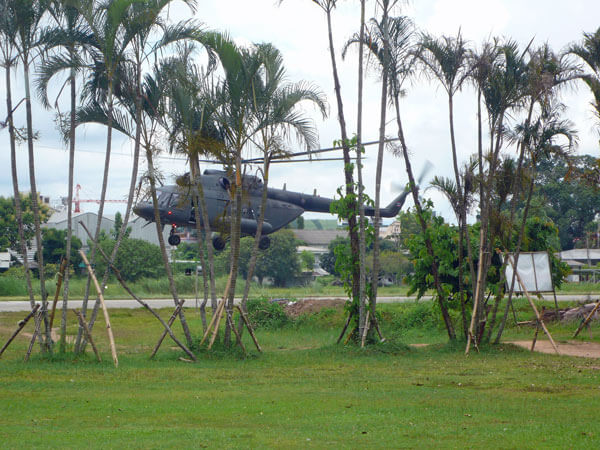 PPS:  Paging Elon Musk:  You’ve not improved with time.  I signed up for “Starlink” when you told me that it’d be available in my area by the end of 2021.  Not likely.  Since then, you’ve (apparently) spent time making it available all over Eastern Europe, so that Ukraine could have better Internet connectivity than me (OK–I’ll give you that), and you’ve been screwing around with Twitter.

Most recently, Starlink now says that it might be available in my area by mid-2023.

Apparently, there’s no way for me to get my $100 deposit back.