“If whiskey was his mistress, his true love was the West” — Will James, Ian Tyson 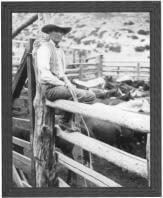 Only a few days ago, I was driving north after spending a quick few days in the mouth of a canyon on the Teton River fronting the Bob Marshall Wilderness Area. I was back in the open, rolling country and heading now toward the far northwest corner of Montana, the Kootenai National Forest and the Yaak River to spend some time with old friends who are permanently camped there, at least for the moment.

Although I didn’t have (or make) time to sidetrack when passing through the country that had been Will James’ last home, I am always reminded some of him whenever I pass through such open, expansive country. In the words of songwriter Ian Tyson, I am reminded of those “tales of wild and windy slopes” which were a part of earlier years.

In my small, country school the “high school” housed grades 7 – 12 and, of course, all shared the same library. I have no way of knowing how many times over that six year span I checked out the single copy of Lone Cowboy with the fading yellow hard cover but I am sure that I finished just ahead of my best friend for total check-outs. Few others besides us had a chance at it.

Lone Cowboy was a best-selling Book-of-the-Month selection from 1930 and was James’ attempt at an autobiography. And quite a bit of it was true, or close to it! Just not the first part.

As a writer and artist, James produced 23 books, at least 1500 drawings, about 45 oils (no one is sure) and an undetermined number of watercolors. His writings were turned into five full length movies as well as another in the Soviet Union. His uninhabited language and the feeling of his visual depiction of horse and man in action were the stuff that young men who responded more to open spaces and a hint of danger than to safe surroundings and secure futures could digest over and over. His black and white, pen and ink and pencil drawings are still among my favorite art. As much as anything, they capture the feelings of either being a spirited horse or sitting atop one. He understood both. Look into the eyes of the horses, at the flair of their nostrils, at either the twisting explosion of their muscles or the calm, relaxed trust they offer.

The man who claimed the name of William Roderick James had cowboyed, wrangled horses and had tried homesteading in Saskatchewan before showing up in Montana in the early 1900s. There he again wrangled horses and cowboyed as well as making a name for himself as a horse tamer. He also had a flare for creative story telling around the campfires and earned the sometimes title of “Windy Bill” which was not an uncommon moniker given folks in that place and time.

By 1914, he had drifted as far as Nevada where his horse taming talents were also noticed. He was also noticed in the possession of rustled stock which earned him a 12 to 18 month prison sentence. On his entry into prison, he listed his birthplace as Montana and it would be decades before it was proven different. In the Lone Cowboy and in later interviews he said it was while in prison that he decided to develop the native art ability which he had practiced for so long. His application for parole had a drawing he named “Turning Point” of him sketching in his cell.

He did travel to California to try and sell some sketches and worked as a stuntman in the silent western movies of the time. 1918 saw him in the Army. He was out in 1919 and begin his “professional” career when he returned to Nevada and sold the illustration for the Reno Rodeo program for $50. He also picked up a job wrangling horses for the event.

After the rodeo, James teamed up with two cowboys, including his future brother-in-law, he had known before the war to give bronc riding exhibitions in Reno. During one of events, Will was thrown headfirst in a railroad track which proved detrimental to quite bit of his scalp and several of his teeth. He was taken into the household of his buddy Fred Conradt while he recovered.

On his recovery, James traveled back to California, this time to enroll in night classes at the California School of Fine Arts in San Francisco. During the day he worked at various jobs and rode horses with some individuals who would remain friends and career promoters for years. During this time he was able to sell some sketches to a west-coast periodical called Sunset.

But at the end of the year, James was back in Nevada to marry 16 year-old Alice Conradt. The couple began a trek that led them from Arizona to New Mexico. It was in northern New Mexico outside of Cimarron that a ranch manger introduced Will to the dean of students from Yale University. So the wandering cowboy actual did spend a term as a Yale student of art. But after failing to sell Life some art work, he headed back west.

By 1922, James had begun to seriously try and sell both his writings and his art. His most important break came from Scribner’s Magazine paying $300 for his first published article. Of course, it was on bucking horses and their riders. Scribner’s would publish James’ article and most of his books for the next two decades. His best known work is Smokey the Cowhorse which won the Newberry Medal for children’s literature in 1927 and was made into three American feature films as well as one in the Soviet Union in the 1980s.

It was decades after his 1942 death, that the first years of this talented cowboy/artist/writer were known. His long-time telling of his early years had him born in Montana to a cowboy and his wife who would die early because of disease. The father would later be gored by a steer leaving the very young Will to be raised by the French-Canadian trapper nicknamed “Bopy” because the boy could not pronounce his real name correctly.

Actually, the future cowboy and artist was born in Quebec and named Joseph Ernest Nephtali in 1892. He grew up speaking a nonstandard, working class French known as “joual”. But he dreamed of being a cowboy and when he was old enough to break for western Canada, he lit out. By 1907, he was in Saskatchewan learning his new trade.

As the years passed, his words were pure cowboy and westerner but he was never quite able to fully get rid of the hint of French influence in the sound of those words. So, the contrived early childhood of being raised by a French-Canadian trapper covered for the sound of his speech. But his words were completely what could be called the “joual” of the west, the nonstandard but completely descriptive language of the working cowboy. His writing might have more than stretched some grammar rules and broken quite a few others but they gave fiber and feeling to the stories of every-day cowboying and the basic elements of the trade, the horse (in words of Tyson, “his heroes were his horses”) and the eye-stretching country which made it all possible.

He did not just know his subject. He understood it. And he loved it. His gift through word and picture was to pass a little of that understanding and love on to not just those of us who would try it on for size but those who might not ever see it but were touched by it in ways they could never know otherwise.

The one bronc he could never completely top off or settle was whiskey. He was 50 years old and in Hollywood when he died of alcoholism in 1942. That was also the year his last book was published, The American Cowboy. The last line of that book, literally the last published words of Will James, was “The cowboy will never die”.

We can all hope he never does.

So every now and then while I drove northwest toward that friendly coffee pot and kitchen table and I looked out at “that house of sky”, I couldn’t help but imagine a mouse-colored grulla cowhorse standing loose-reined in a bosal headstall with a slim-hipped, hawk-nosed cowboy sitting easy in a high-shoulder saddle wearing a wide-brimmed turn-of-the-century hat. I hope my mind will always be able to see them there on those “wild and windy slopes”.