When I first read about it, I admit I admired the entrepreneurial spirit (if maybe not the ethics) of those who provide “antiracist” training dinners for wealthy white women at $2,500 a head.  It seems clear that this kind of activity can help spread the new religion (as it is called by John McWhorter, or the new Puritanism according to Noah Rothman). It would foster attitudes useful for electing left-wing politicians, but what exactly does it do for racism’s putative victims, particularly the urban poor?

There is something very Harry Potterish about the woke.  They believe that white people can impose systemic racism merely through their thoughts.  White people’s thoughts are so powerful that they can even unconsciously oppress non-white people.  Non-white people are more like muggles.  They have no magic and their behaviors and destiny can be directed or controlled by those who do possess magic.  In essence, they have no agency and their well-being depends solely on whether the good wizards/witches can defeat the bad ones.

The muggles include a sizeable number of individuals with behavior problems.  For example, the murder rate among 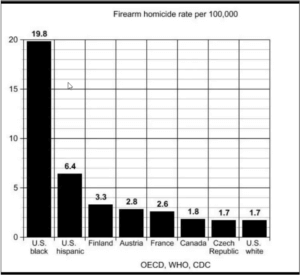 African-Americans is vastly higher than for white Americans. (Horrific chart to the right).

How many rich white women “doing the work” would it take to reduce that rate by 20% or more?  If all professional sports players take a knee before each game and if Shakespeare and Mark Twain are expunged, how many lives would that save?

The unspoken premise coming from our new national Hogwarts is that woke consciousness will affect political change, which will solve any problems caused by disparities and inequities.  But how?  The USA lost the War of Poverty despite trillions spent. What is the program mix or dollar amount that would have worked and not caused damage instead? Or was the spending and program mix just right but undermined by the collective evil thinking by the bad magic holders? OK, which of you out there is NOT wishing for Tinker Bell’s recovery ?!!

Booker T. Washington, W.E.B. Du Bois, Martin Luther King, and Malcolm X had radically different political visions but shared the commonsense assumption that education, personal virtues,  good habits, and seizing opportunity whenever wherever it appeared were keys to both personal and collective advancement.  For the first time in our history, black leaders, under the guidance of the enlightened woke, are endorsing the notion that the deck is so stacked against black youth they should not strive but simply rely on the woke to save them.  Being on time, homework, and the entire corpus of learning and skills that has empowered white people are to be rejected in the name of anti-racism.  Criminals should not be jailed.  Violent protests are the only legitimate form of political expression because the despair of ever using “the system” is now the right outlook.  Personal responsibility is to be erased lest we blame the victim.

In the 1850s, if we conducted a national poll, an overwhelming majority of whites would likely have answered “yes” to Would it have been better if slavery had never come to America? –probably a majority even in the south.  A smaller majority would have responded in the affirmative to Is the enslavement of human beings immoral but a follow-up question So, should we just abolish slavery? probably would not have commanded a majority because of the widespread belief that those who knew nothing but slavery could not hack it as free men and chaos would follow sudden abolition.

I have the feeling that the new racism emanating from the woke religion is bringing back that 1850’s notion of black incapacity, a people defined entirely by their imposed limitations.

Back then, meeting Frederick Douglass probably did more to dispel the notion of black incapacity than any abstract arguments.  Today, we have an abundance of successful, admirable black Americans. Yet, the dogma of black helplessness and the dependency on the outcome of a battle of angelic (white) beings is growing in acceptance even in the face of overwhelming visible evidence to the contrary.

America was founded on the idea that we are all muggles and charged with responsibility for our own lives and choices.  Specific, tangible instances of injustice can be addressed by law. Personal and collective acts of charity and compassion have always been encouraged.  But an assumption that some of us can never be held responsible, never expected to strive, or that there can be programmatic or ideological substitutes for organic human community is inherently destructive and even dehumanizing.