In 1962 at the family-owned German pharmaceutical company Grunenthal, the drug tramadol would first be synthesized. The chemical structure of tramadol determines its unique and variable pharmacokinetics. The red arrows below point at the most crucial part of the chemical structure, the single chiral carbon which makes tramadol an enantiomer. While the chemical structure is the same, these mirror images of each other have different three-dimensional configurations, which results in different pharmacological effects. Commercially supplied tramadol is a racemic mixture of these two versions.

Branded as Ultram in ‘95, it would first be marketed for pain relief as an alternative to other opiates with more abuse potential. It was an easy sell, especially considering at the time it was not a controlled substance. This meant that prescribing tramadol was far easier than other pain medications and without all the paperwork and strings attached to satisfy the DEA. A 1999 study using post-marketing surveillance to monitor for abuse of Ultram would support the decision to not schedule it after concluding that abuse was occurring in only 1 out 100,000 patients. After about a decade on the market however that would change, and the DEA would move it to Schedule IV due to abuse concerns.

Tramadol’s pain-relieving effect is achieved by activation of the mu opioid receptor, it also blocks serotonin and norepinephrine reuptake. As it is processed in the liver by the CYP2D6 enzyme it creates a metabolite that has even higher affinity for the opioid receptor and a longer half-life called M1. Without knowing your personal genetics, it is a complete roll of the dice which of these pathways will be most dominant. Variances in CYP2D6 expression occur across the population explaining the diverse results of it not working at all or patients becoming quickly dependent on it.

The serotonin and norepinephrine reuptake inhibition are thought to contribute to pain relief by helping block pain signals. Unfortunately, it also leads to potential adverse events like serotonin syndrome and seizures. Drug interactions increase these risks especially antidepressants that are already acting by increasing serotonin. By altering the activity of the CYP2D6 enzyme, these other mechanisms of action can be reduced or potentiated in relation. Those with particularly high CYP2D6 enzyme activity are called ultra-metabolizers and they can generate enough of the M1 metabolite to cause respiratory depression even at standard doses. Due to these risks, the FDA has issued guidance that the medication should be avoided in these patients. This is also the reason it is a risk category C for expecting or nursing mothers, which means that risks cannot be ruled out. Case reports of infant death in nursing mothers taking Codeine which is remarkably like tramadol have been linked to CYP2D6 enzyme.

Tramadol is messier than most divorces and the moral of the story here is the exceptional failure of our one size fits all approach to medicine and dosing. It is a splendid example of how two things can be true at the same time for different people. How else could a drug be so dangerous that it must be scheduled by the FDA despite having five years of post-marketing surveillance that indicates exactly the opposite? The Dutch Pharmacokinetic Working Group has released dosing guidelines based on individual genetics which can help determine CYP2D6 activity but cautions that as the ratio of tramadol and M1 changes so does the analgesic effect, so dose adjustments are simply impossible to determine. 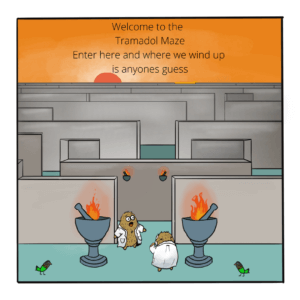