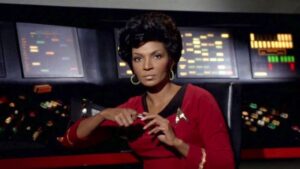 I wasn’t allowed to stay up to watch Star Trek (the original series) during its first run (though I dearly wanted to) but watched it faithfully in syndication. When my mother would ask me to turn off the TV, I would say, “But I haven’t seen this one all the way through!” (Usually lying.)

As the members of the original cast pass away, it saddens me. This is very much true as I learned today of the death of Nichelle Nichols.  We talked recently at the Movie Fight Club of childhood crushes and she was one of mine.

Star Trek was a politically liberal show for its time. But it was classically liberal, which meant back then that it called for racial equality and fair play. It could be hamfisted in this at times (such as the episode “Let That Be Your Last Battlefield”), but it was mostly all for the good.

This is made very clear in this story of an encounter between Nichols and Dr. Rev. Martin Luther King Jr.:

It was 1967, and reviews for the first season of Star Trek were not great. Nichelle Nichols, who played Lt. Nyota Uhura, had bigger issues with the show. She found it demoralizing to see her lines cut and cut again. She had to deal with racist insults off set, as well as from executives who conspired to keep her from seeing her fan mail.

At the end of the first season, Nichols recounted in her autobiography, she told the show’s creator she was done.

But the next day, at an NAACP function, a fan greeted her: Martin Luther King Jr. He told her how important her role was and how he and his family watched Star Trek faithfully and adored her in particular — the only Black character.

Nichols thanked him, but said she planned to leave.

“You cannot and you must not,” she recalls him saying. “Don’t you realize how important your presence, your character is? … Don’t you see? This is not a Black role, and this is not a female role. You have the first non stereotypical role on television, male or female. You have broken ground.

She stayed for two more seasons, voiced the animated series, and appeared as Lt.  Uhura in six films.

In “Bread and Circuses,” a Roman-times episode of Star Trek, it was Uhura that recognized a group on the planet wasn’t worshiping the sun in the sky but rather the Son of God. I’m trusting Ms. Nichols is in the loving hands of that Son.