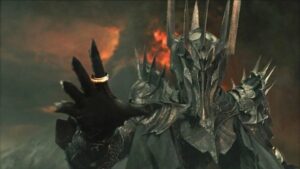 After reading Dr. Bastiat’s latest piece and a few other essays on Ricochet, I have developed a Morgoth theory of hard leftism. In The Silmarillion, Tolkien writes about how Morgoth became jealous of the creator god because he could not create things as beautiful as he could. Feeling resentful, he decided to pervert what he could not create.

Let’s go down the list of leftist contempt for humanity and humanity’s pursuit of beauty and goodness:

The hard lefties I knew in a few colleges weren’t really concerned about the little guy. They didn’t know a lot of poor people who were mistreated by the system and they didn’t hang out with oppressed minorities. They were resentful of their societies and themselves so they pretended to champion the weak in order to become a stronger Morgoth.

As we all have observed, the academic and artistic elite are obsessed with deconstructing everything. The literal meaning of that word means to take apart what was already built. In practice, deconstructionism says that everything from the past was bigoted in such a manner that renders it illegitimate and worthy of destruction.

Look at how they focus on tearing down statues. I cannot think of a better example of their yearning for destruction.

Recently, a vulgar and entertaining podcast I listen to had two podcasters pretty much summing up the hard leftist mindset: Boyscast (NSFW)

Ryan: “If you not angry at your parents you’re [redacted]”…

Danny: They get joy from like nothing. Like, even if you post a photo of like a dog and people say, well, that dog isn’t choosing to be in this photo right now. That dog is a slave. Someone bought that dog.

Ryan: “Some people don’t have dogs.”

Danny: Yeah, some people don’t have dogs. Yeah, they are miserable. And these people live in California. Do they have that much to be miserable about?

My theory is that miserable people often can’t accept that they are miserable for internal reasons, so they externalize. I have heard that some deeply unhappy people change their careers or they move to different cities in order to escape their depression or they go through many different intimate relationships very quickly. It’s an understandable impulse. It’s not easy to understand oneself and looking inward is often quite painful. One of the best stories about looking inward is in The Brothers Karamazov. When Ivan realized that his nihilistic materialist atheism inspired a murder, he undergoes a brain fever and hallucinates/meets the Devil. This isn’t uncommon in old literature. When characters undergo an intense realization or epiphany, it’s often accompanied by a sudden sickness and weeks in bed. Why wouldn’t people avoid that and just blame capitalism or patriarchy or whatever the word of the day is?

The podcaster Adam Carolla (yes, I listen to a lot of podcasts) also talks about how success can destroy people who are depressed in Hollywood. When people are starving actors or singers, they are constantly trying to make it and they have limited funds and time to invest in drugs or Scientology. The constant struggle keeps you from imploding. But eventually, some people make it and they have so many residual checks that they don’t need to work anymore. They now have a large mansion that lets them isolate themselves and things can get really bad really quickly.

There is a similar pattern to generational wealth.  As Whittaker Chambers noted in the past, “In the United States, the working class are Democrats. The middle class are Republicans. The upper class are Communists.” In present times, more working class are Republicans and some of the maleducated middle class are Democrats. The upper class are still communists. With the luxury to sit and think all day, they become miserable and nihilistic and wish to destroy the society that made them comfortable and secure.

Beauty and the Human Form

*I was discussing beauty with Mark Camp. We discussed how beautiful Japanese and Indian paintings are in their own odd and unique way. As different as those art forms are, they always strived to be beautiful. If a painter or an architect tried to turn against beauty or against his thousand-year tradition of pursuing that beauty, he would have become a pariah. It is only in Western Civilization that artists began to love ugliness and raise individual innovation above all other values.

Don’t you notice how bizarre and ugly leftist protesters look? I am aware of all the crass but amusing right-wing jokes, but I wish to make a serious point here. In the Antifa or BLM protests, there are girls who are kind of cute but they try to make themselves look ugly with a boy’s haircut and unfeminine clothing. Many of them are covered in tattoos and ear piercings to represent their individuality, though it makes them all look the same.

Another assault on beauty and reality is the body-positive movement. As I understand this movement, it is entirely a left-wing thing. The idea is that if you are fat and not particularly attractive, you shouldn’t feel bad because it’s society’s fault for not finding you attractive. In a similar fashion, some radical trans people are offended that many straight people don’t want to date them. Both ideologies are ready to ignore the significant medical complications concerning both obesity and transgender surgeries.

If the left was motivated by a compassion that based itself on reality, they would support some version of capitalism in order to enrich the poor and support the nuclear family because it is essential to all human flourishing. I assume that most of the Ricochetti are well-researched enough to know the overwhelming evidence in support of both some version of free markets and a strong family. Logically, people who are devoted to the poor and the downtrodden would want to focus on what has been proven to help the poor and the downtrodden.

In the last few generations, many Asian countries have gone from African levels of poverty to near universal literacy and enough rice and vegetables to feed even beggars. Africa itself is becoming wealthier as the Asian countries have done. Literally, billions of human beings have left absolute poverty and it has almost everything to do with free markets.

The left doesn’t care because capitalism is an icky word. Their compassion doesn’t relate to poor people in reality.

I could go on but I think I’ve made my point. Among the hard leftists is a hatred of what is good and beautiful is more of a motivation than compassion. We aren’t confronting nice but misguided people who just need to listen to some Thomas Sowell lectures. In our age, we are more comfortable with data points and meta-analysis and graphs. Those are all great if we are having a reasonable argument. But this isn’t about a disagreement of policy. We are confronting a spiritual nihilism and it’s time we act like it.