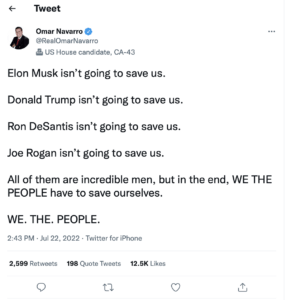 The truth is in this tweet. We cannot sit around waiting for the country to be saved.  Yes, we can and should support people who offer to organize and to act, but we must also take responsibility in our everyday lives. We must be the people that insist we, not they, govern our country. We must exercise fully our own rights and liberties and demand that government respects our rights and liberties. We cannot be passive. We must live our truth. And we must be seen as doing so.

You don’t need to be obnoxious about doing so. But you must be steadfast and not intimidated. The government was established by contract, and that contract is broken. We do not have equal justice under the law so long as “mostly peaceful protests (TM)” can firebomb our cities without consequence but people let into the Capitol and “parading” are in solitary confinement; so long as Bannon is tried for contempt of Congress, but Holder, Lerner are not, and Clapper and Brennan can lie with impunity.

We need a constitutional convention, not because the old one was inadequate, but to reaffirm the founding principles and forestall and disclaim any “living” aspect to a constitution short of amendment. There is risk in calling for a convention, but there is a greater risk that progressive ideology will render any contract with the people meaningless.

In November, there should not be one vote cast for a (D). The (R) is not a cure, but we can deal with the uni-party later. And when we do win in November, we cannot stop and we must remain vocal and determined that (R)s do not betray us. If the outcome is strong enough in November, then the primaries in 2024 are where we can do the clean-up and ignore the calls that we risk losing power if we do not support a uni-party candidate.

The powers that be need to understand that either we control our government with our votes or by full exercise of those rights that no government can lawfully deny; that their fortune and futures depend on faithful representation, not tyranny.