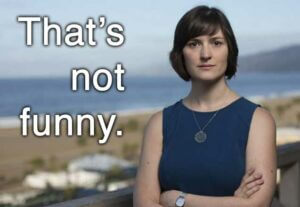 There is another reason they hate humor and wish it suppressed. The Woke are eminently mockable. The devil hates to be mocked. No one tells jokes in Hell. Similarly (and for pretty much the same reasons) the Woke folk hate to be mocked.  It jolts them. It is their Achilles heel. They know it. So they ban it.

Except, we are not yet in Hell. We are allowed to tell jokes.  So mock them – every chance you get.  Tell jokes about them.  Expose their failings with humor.  There are far more Normals, based individuals, than there are Woke folk.  And the Normals know how ridiculous the Woke folk are. Humor is our most effective weapon in this fight. Use it.