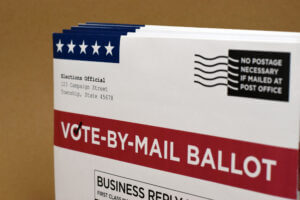 The debate over election fraud versus voter suppression is high-stakes and high-intensity. Trump loyalists insist the election was stolen, mechanically rigged, and rife with fraudulent actors. Democrats continue to insist that fraud never happens, an argument easily swatted away by the existence of thousands of documented incidents.

But Democrats have a point in that the problematic behaviors – bulk mail voting, ballot harvesting, and related practices – were permitted by law in most states. That means, according to the “fact checkers,” that all reasonable people must agree that there was No Fraud.

Trump fought the wrong war at the wrong time. While he was ranting about corrupt voting machines, rogue election workers, and a cascade of assorted allegations, Democrats in the last two elections were cleverly creating election rules intended to create a permanent majority.

Trump and his supporters were never able to prevail in a court of law. In the end, they were outsmarted and lost the election to a pathetically weak candidate.

Attorney General Bill Barr was an astute, loyal adviser to Trump during the election. Unfortunately, his advice to stop exploring rabbit holes was not heeded. Yet he would see the traps the Democrats were setting in September 2020.

Bulk mail balloting is not your father’s absentee voting, he explained on CNN. “Instead of requests coming from a specific address, we are now going to mail them to everyone on a voter list, when everyone knows the voter lists are inaccurate.”

“People who should get them don’t get them … and people who get them are not the right people. They are people who have replaced the previous occupant … and sometimes multiple ballots come to the same address with several generations of previous occupants.” That’s no way to run an election, he concluded.

He’s right. For generations, America had voting laws that produced fair, reliable results. The laws required that all voters register beforehand and present a secure ID. All votes were cast confidentially. Absolutely no intimidation or persuasion was allowed in or near a polling station.

Importantly, there was a strict chain of custody to make sure that there could be no tampering and that all legally cast ballots would be counted. Voting was done mostly on site although accommodations were made for those unable to vote in person on election day.

That was the American way of conducting elections. Now all that has changed. Millions of ballots are sent automatically to voters just because they didn’t opt out of receiving one. Nobody knows what happens to them until they are returned.

Helpful party workers can collect them, offer aid with voting and often leave them anonymously in drop boxes. The notoriously unreliable signature verification often is the only ID required.

Today, this is all perfectly legal. Of course, it’s illegal to vote a ballot not your own, to unduly influence another voter or to fail to deliver certain ballots. But with bulk mail voting, none of this is detectable.

Once a mail-in ballot is opened and separated from its envelope, any possible proof of fraud is lost, no matter how many audits and investigations are performed. We have a voting system obviously prone to fraud and coercion yet opaque to any misdeeds committed within it.

Arizona voters, thanks to their legislature, will have a chance this year to close one gaping flaw in our system by approving a requirement of voter ID for bulk-mail voters. There is no coherent reason to require ID at the polls while bulk-mail voters get a pass.

Although the media continues to insist that those who support voter ID are “vote suppressors,” Americans smell a rat. According to a Quinnipiac poll, only 60% of voters overall believed the last election to be legitimate.

In the end, it may not matter that much how much “provable fraud” can be discovered. So long as we have a slipshod, non-secure system like bulk-mail voting, it will be difficult to convince voters of the integrity of their vote.

In a closely divided country, it is critical that citizens have confidence in elections and the legitimacy of the government. As Bill Barr says, “we are playing with fire.”