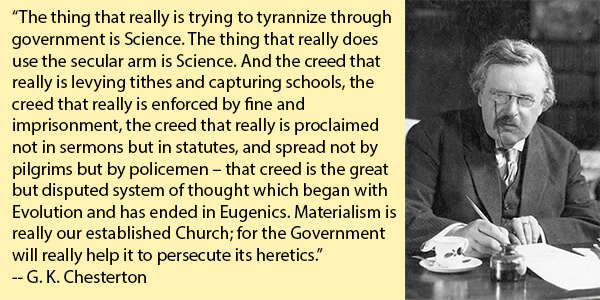 Once the twin pillars of education and language are corrupted, science and religion are quick to follow.

The elevation of math and science, particularly at the end of the 18th century, has been a boon on many levels, but a corruption in one grand arena: math and science replacing God by elevating the material as the only reality. Never mind that science is incapable of measuring anything beyond the material.

The Scientific Method, properly applied, can get to certain material truths. But there are other truths as well that can only be achieved through direct personal experience. Spiritual experiences and literal miracles can be experienced by those who know how to open the inner door to them.

Since a reliance on anything other than the state is anathema to totalitarians, personal religion has no place. It must be corrupted into pursuing mere social causes.

A culture imbued with a Judeo-Christian heritage has one significant advantage, even for those who may ultimately choose not to follow Judeo-Christian teachings: It imbues those raised in it with a Moral Conscience.

To interrupt that heritage is central to the totalitarian. Everyone must be raised in such a way as to avoid their acquiring a moral conscience.

@Rodin has a really fine take on religion and morals. Here’s a small bit:

The Great Resetters are using “breaking” to get what they want. Everything is under stress. No stable system is to be left untouched if it is not already under authoritarian control. That is the strategy, the only question is how to control the outcome. (It is inherent in an authoritarian mindset to accept as an article of faith that the outcome can be controlled.) And although that faith is not justified, it does not mean that the authoritarians will not succeed.

Chapter 1 of Mattias Desmet’s The Psychology of Totalitarianism “Science and Ideology” is an articulate masterpiece that describes the state of math and science in the world today. And you can read it for free by clicking on the Amazon link above, and then clicking on the book cover, which takes you to the Introduction and Chapter 1. Here’s just a smidgeon:

Daniele Fanelli conducted a systematic survey in 2009 and found that at least 72 percent of researchers were willing to somehow distort their research results. On top of that, research was also replete with unintentional calculation mistakes and other errors. An article in Nature rightly called it “a tragedy of errors.” All of this translated into a problem of replicability of scientific findings. To put it simply, this means that the results of scientific experiments were not stable. When several researchers performed the same experiment, they came to different findings.

The hard truth about science and math is that it’s fundamentally about accountability. Practical application of math is not open to interpretation. It is what it is.

But that is dangerous. The totalitarian goal is no foundation allowed other than the daily pronouncements of the state. Math will be in the way, especially the math that prevents the corruption of evidence and reason. 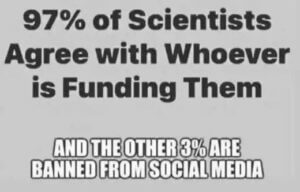 When education, language, history, and so much more have been corrupted, those who make a career in scientific research are wide open to corruption. When one’s job is dependent on the funding of a corrupt government or university, when one’s reputation and livelihood are at stake, then it’s easy to rationalize adjusting the math and practicing science to support predetermined outcomes.

Such is the nature of climate “science,” renewable energy “science,” health “science” (that so easily provides billions to pharmaceutical companies), and every other kind of “science.”

The goal is simple: Corrupt the understanding of math (Hey, 2+2 does equal 5, sometimes) and statistics to support any kind of science needed as the excuse to justify every radical notion of government force.

The foundation of a moral and ethical culture is a recognition that life is more than the merely material, and that in some form we are held accountable, individually, for everything that we think, do, and say. Thus, every religion and belief in the spiritual is a direct threat to totalitarians.

But you know all this. And you can now see the results.

Almost all the children in adult bodies are uncritically amoral, or perhaps more precisely, adopters of a shapeshifting morality that can always blame others and hold everyone accountable except themselves.

Which is the totalitarian goal, of course. The masses shift with their leaders day to day, hour to hour, even minute by minute, if necessary. There is no accountability for consistency. Consistency is the enemy to progress, to the state, to the ideal.

The Church of England is not immune. A bishop now says there is no official definition of a woman.

The infiltration of religions becomes easy once the emphasis is shifted to helping others, not just in a voluntary community way. No, volunteers are not enough, especially when it promotes community. Helping others must be coerced by government.

The side benefit of such coercion? An administrative class whose livelihood depends on perpetuating what keeps their jobs going. No social problem need be solved. More funding is necessary. More administrators and social workers must be hired. And thus their votes are in place, until no longer needed, to support their totalitarian leaders.

You only need to persuade a majority of the children in adult bodies that they can trust the “experts” of math and science, children who can never grasp Richard Feynman’s definition of science:

But it’s fine. The consensus of world expert scientists say with absolute authority that it’s okay. Even when they change what they say month to month, week to week, day to day. And don’t forget: The latest studies show all previous predictions were wrong. Science needs more taxpayer-funded research.

Even good classical liberals and conservatives will fail to recognize how much of what they believe to be true is based on authorities repeatedly reported in media. They do not realize how subtle the programming can be when something is repeatedly reported far and wide in our main authoritative news sources. Sources that you already know are corrupt but consume anyway. Especially when alternative views and testimony are suppressed and discredited in a way that makes you feel it would be a waste of time to even hear their testimony.

All science is good, all the time.

Once God is replaced by science, once the spiritual realm is made irrelevant to the material realm, then the corruption can target other uniquely American foundations.

CORRUPT SCIENCE AND RELIGION
STATUS AS OF 2022: GOAL ACHIEVED