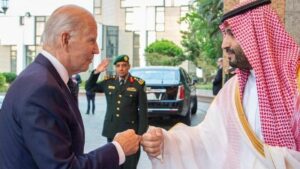 I think that President Biden’s recent visit to Saudi Arabia was a success. In fact, I suspect that it was scripted in advance and agreed on by both parties. Mr. Biden needed to be seen trying to increase the oil supply and reduce gas prices. And he needed Saudi Arabia to say no, publicly. Thus, Mr. Biden can blame Saudi Arabia for the high gas prices, just like he’s blaming Putin for inflation.

Mr. Biden has been in politics for 50 years. He understands that his job is not to fix a problem but to shift blame and capitalize politically on a problem.

But some thought that his visit to Saudi Arabia was simply another opportunity for Mr. Biden to demonstrate his weakness as a leader. In fact, there is more and more chatter about replacing him as President. So let’s break this down, from the standpoint of both Democrats and Republicans, in the two realms of domestic and foreign policy.

In terms of domestic policy, I get the impression that Democrats are frustrated with Mr. Biden. I don’t understand why. From my perspective, he has been successful at promoting Democrat policies. The abortion ruling was not his fault. But Democrats have gotten nearly everything else they could have hoped for in economic policies and social policies. A 50/50 Senate with two moderates means that they won’t win everything, no matter who’s in charge. But I think he’s been reasonably productive for them, all things considered. Still, many Democrats are starting to grumble about his uninspiring leadership. 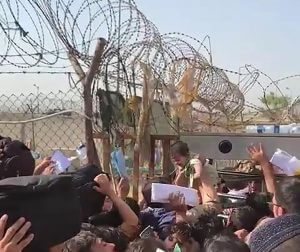 In terms of foreign policy, surely even Democrats recognize the clear and present danger that Mr. Biden presents to world peace. Putin understands exactly what Biden is, as does Xi, Kim Jong-Un, and every other American enemy. Our allies also understand exactly what Biden is. A corrupt fool is in charge of the defense of Western countries, and that creates instability. I would presume that many who voted for Mr. Biden are starting to recognize that things could go horribly wrong, very quickly, with Mr. Biden at the helm.

So I think that when Democrats look at domestic policy, and at foreign policy, I suspect that they are looking for ways to ease Mr. Biden out. If they can find a way to do so gracefully without making the entire Democrat party look incompetent in the process. That may be tricky. But I’ll bet they’re talking about options.

In terms of domestic policy, I think that Republicans would be foolish to attempt to replace Mr. Biden. He is as good as it gets right now. His laziness and incompetence are what one hopes for in an adversary. Nearly any other Democrat would likely be more even more effective at enacting Democrat policies. So I say we do what we can to keep him in office.

Which makes a lot of sense, until we consider foreign policy. My God. 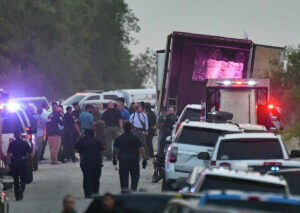 The catastrophe in Afghanistan did not have to happen. Neither did the daily catastrophes at our southern border. Neither did Ukraine. What’s next? I’m not sure that America has looked this weak and helpless in the past 100 years, which creates opportunities for common thugs like Afghan warlords and Vladimir Putin. It also creates opportunities for more sophisticated adversaries like Xi and others. And every time someone takes advantage of this unique historical opportunity, it can either go badly or very badly.

Ukraine could fall into Russian hands. Or, Russia could keep moving past Ukraine and attempt to take other parts of Europe. Who will stop him? If anyone tries, he could launch a World War. Next week.

Again, any one of these fiascoes could blow up in our face. Wars are unpredictable, particularly in this age of nuclear weapons, bioweapons, EMPs, hackers attacking computer-controlled infrastructure systems, etc. Very bad things could happen very quickly. Who will stop them?

So from a domestic policy standpoint, I think Republicans should try to keep Joe Biden in the Oval Office. But the risk he presents to foreign policy makes this approach too dangerous.

This means, I think, that Democrats and Republicans would both try to remove President Biden if possible.

But I just can’t imagine how that could possibly happen. 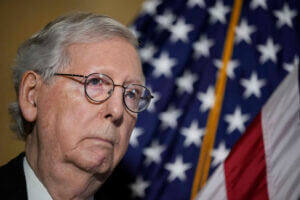 Regardless of how many Congressional seats the Republicans win in the fall, I just can’t imagine Joe Biden being removed from office via impeachment. Maybe, I guess.

But I just can’t imagine that.

I also can’t imagine anyone invoking the 25th amendment. It’s not like we elected a healthy man who had a stroke a year later and ended up in a coma. Mr. Biden is in very similar condition today as the day he was “elected.”  Maybe somewhat worse. But he was like this during the election, which is why he didn’t campaign.

So the American people determined that he was sufficiently healthy to win the presidency, but then we decide that he’s not? That will be tricky.

Mr. Biden could step down, of course. Except that he won’t. For 50 years, he’s never expressed an interest in anything other than furthering the career of Joe Biden. Sacrificing for love of country is not his style.  Just typing that made me chuckle. 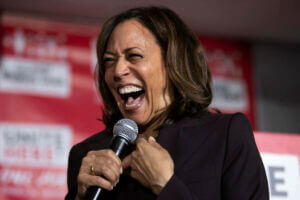 The other problem, of course, is Kamala Harris.  She may be less intelligent than Joe Biden (sit down and think about that for a minute…), but just as vicious, and just as incompetent. I don’t see how replacing Biden with Harris helps either the Democrats or Republicans, with either domestic or foreign policy.

So, yes, I suspect that the leaders of both parties would be happy if Mr. Biden were not president right now. But in the real world, I just don’t see how that can happen.

We’ll see. But I suspect that Mr. Biden will complete his term. He may even run for re-election. In fact, I presume that he will.

Even if he is replaced, I’m not sure how much it will matter. The Democrat who replaces him will enact Democrat policies, just like Mr. Biden. With similar results. 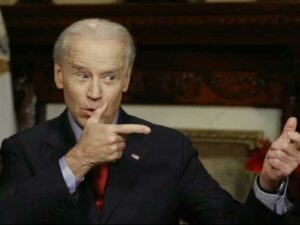 This is the problem with doing something profoundly stupid, like “electing” Joe Biden to be the leader of the free world. I think we’ve set a course that cannot easily be changed. I just don’t see a way out of this.

Well, except for the obvious, of course. The way out of this was to not elect Mr. Biden to begin with. None of this was difficult to foresee.

But it’s too late for that.

When someone really wants to commit suicide, it can be very difficult to stop them. This is true of individuals, but also of countries and even cultures.

The Democratic Party has sought to fundamentally transform The United States of America at least since President Wilson. It appears that, at long last, they’ve succeeded.

As usual, I really, really hope I’m wrong about all this…