Channeling his inner Marie Antoinette and demonstrating an example of the Biden Administration’s unparalleled tone-deafness a few weeks ago, US Transportation Secretary Pete Buttigieg has simple advice for combatting higher gasoline prices: Buy an electric car.

At least he hasn’t advised us to eat more insects yet. But it may be only a matter of time. The same interests and climate cultists pushing EVs also encourage you to eat bugs. Behind all this is a punitive and bizarre economic and cultural agenda. More sustainable for the planet, they claim, as they move us towards a “net zero emissions economy” by 2050. If not sooner. More about that later.

While I like the electric cars I’ve ridden (Tesla, Nissan Leaf) and find them pretty cool, it’s not because I’m part of a climate cult. I’m also not running out to buy an EV because I want to lower my carbon footprint or “save the planet.” It’s effortless for elitists like Buttigieg to tell people to buy an electric car when the average price of a new one, $66,000, is about 30 percent higher than the average price for a new “conventional” fuel vehicle. Do you know how long it may take to make up for the difference in fuel costs? The life of the car, if you’re fortunate. In fairness, you can buy a smaller new EV (if you can find one, given a severe shortage of computer chips) for about $40,000 before taxes and other stuff until the batteries wear out.

And then there’s the issue of keeping your EV charged. I live in a condo community of over 4,000 homes in northern Virginia, one of the hotter EV markets in the US. We have precisely two charging stations near our management office. And while you’re helping subsidize both charging stations and the cost to purchase these vehicles, thanks to infrastructure legislation and tax credits, that’s not much consolation for people in more rural areas where EVs are impractical. You rely more on vehicles than your mass-transit accessible suburban and urban neighbors, especially if your truck is essential for your job. And EVs pay no gasoline taxes to help upkeep roads everyone uses.

But EV proponents aren’t telling you the vast carbon footprint cost of building one. They don’t precisely comport with our allegedly “carbon-free future,” despite the lack of emissions from an EV – especially if the electricity generated to charge that EV comes from a coal-fired plant. Or all the mining methods and sources needed to extract nickel, cobalt, and lithium for your batteries.

The reality is that while EVs comprise about 5 percent of vehicle sales today (compared to 10 and 20 percent in Europe and China, respectively), parts of our grid are already proving incapable of handling the burden. You already know if you own an EV in Texas or California. From the website Electrek:

Tesla is trying to help Texas’s electric grid again amid another heat wave with its electric cars until it can with Powerwalls as it lobbies for some rule changes.

Texas has a notoriously fragile grid that is having issues supporting increasing peak electricity demand.

The issues have mostly come in the winter amid cold fronts, but the state’s electric grid has had issues this year with early heat waves.

The first one hit as soon as May, and it tripped six power plants in the state.

At the time, Tesla introduced a new way to try to help out with a new in-car alert to Tesla owners in the state encouraging them not to charge between 3 p.m. and 8 p.m. if they can avoid it:

A heat wave is expected to impact the grid in Texas over the next few days. The grid operator recommends to avoid charging during peak hours between 3pm and 8pm, if possible, to help statewide efforts to manage demand.

Texas is now being hit by another heat wave, and Tesla has brought back the alert yesterday, and it is expected to be active for the next few days since the temperature is well over 100F (38C).

Enjoy your brownouts and blackouts in 100-degree weather while your wealthier Tesla-driving neighbor keeps their EV charged.

But as the US government is shoveling around $1 billion in tax subsidies for wealthy EV buyers on top of $5 billion in infrastructure funding to build EV power stations, Canada may be looking to the next trend: subsidizing cricket farms for food. Human and pet food. From PetFoodProcessing.net:

Agriculture and Agri-Food Canada revealed June 27 an $8.5 million investment to Aspire, an insect agricultural company, to build a new production facility in Canada. The facility will process cricket-based protein, helping to advance the use of insect proteins in human and pet food products.

According to Agriculture and Agri-Food Canada, food-grade processing of insects is relatively new in Canada, however insect-based proteins create an opportunity for the country’s agri-food industry to develop more sustainable products.

“The strength of Canadian agriculture has always been its openness to new ideas and new approaches,” said Peter Fragiskatos, parliamentary secretary to the Minister of National Revenue and member of Parliament for London North Center. “Aspire is helping to re-shape how we think about agriculture and opening the door to new product and market opportunities.”

Founded in 2013, Aspire strives to tackle worldwide food scarcity with a focus on edible insect production, therefore developing highly nutritious foods and lowering its environmental impact. Currently, the company has production facilities in London, Ontario, and Austin, Texas. In 2020, Aspire purchased 12 acres of land in Ontario to construct what it expects to be the largest automated, food-grade cricket processing facility in the world.

The US Department of Agriculture can’t be far behind. You and Fido can both share the same “sustainable” high-protein meal.

American food makers have long been bombarded by companies looking to sell them high-protein cricket powder. But you don’t have to wait for them. You can go right to Amazon and order your own. And if you’re sure what bugs you can eat or how to prepare them, Amazon has books for that, too.

It seems the same mindset that pushes EVs to help “save the planet” (not from cobalt strip mines) or a “more sustainable” world is also encouraging you to eat bugs. And they’re happy to appropriate your tax money to subsidize both. It’s just their latest gambits.

And they’re also fomenting revolts, if not an actual revolution, in their cause to save the planet. Ask farmers in the Netherlands, a small country that trails only the United States in exporting agriculture products worldwide. Or maybe ask the now-deposed former President of Sri Lanka, whose decision to ban the import of chemical fertilizers decimated the nation’s agriculture industry and began the foment. 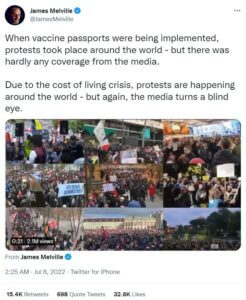 Have you seen much coverage of massive protests worldwide to challenge these and other economic policies that are driving higher inflation and destroying the livelihoods of workers and their families? The Federalist:

And never mind the trucker protests in Canada over covid-related policies (blocking the unvaccinated US and Canadian truck drivers from crossing the world’s most heavily traded border). Over $1 billion in goods traverse the US-Canada border every day. Or used to.

The culmination of these protests suggests the world’s working class is fed up with failing governmental economic policies, including punitive climate change diktats from arrogant, hypocritical, delusional, and dangerous elitists already contributing to food and other supply chain shortages. And if people are not fed up, they’re checking out. Supply chain disruptions, anyone?

Americans appear, for the most part, to be preparing for their protests at the ballot box in November. They know we can be smarter about migrating towards a more sustainable and prosperous world that lifts all boats instead of sinking them.