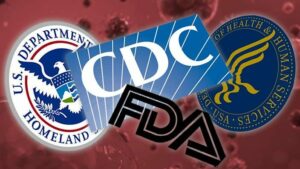 Remember when the Democratic partisans and the media (but I repeat myself) complained that President Trump and his Administration were politicizing important health agencies, like the Centers for Disease Control (CDC), National Institutes of Health (NIH), and Food and Drug Administration (FDA). Good times!

“’I’ve been following health regulatory decisions for decades and have never seen this amount of White House arm twisting to force agencies like FDA and CDC to make decisions based on political pressure, rather than the best science,’” said Jerome Avorn, a professor of medicine at Harvard Medical School, who decried the ‘routine policy distortions we now see nearly every week,’” exclaimed in an August 2020 op-ed in the Washington Post (also appearing in other newspapers) during the Covid pandemic.

We hear every public health leader in the nation talking about how serious this pandemic is, talking about the steps we need to take as individuals and as a nation to ensure that we minimize the damage to people’s lives.

And then we hear politicians, starting at the White House, talk about how there’s nothing to worry about, how public health is overplaying this. And the injection of politics into a public health response is extremely dangerous for the nation.

CDC is the nation’s public health agency. And their guidance informs what states do, what local public health does. By injecting politics into it and undermining the trust that we need to have in that guidance, it puts people’s lives at risk.

Fast forward to today and an important Substack post by Drs. Marty Makary and Tracy Beth Hoeg on . . . wait for it . . . how those same agencies are experiencing an exodus due to the politicization of science during the Biden-Harris Administration.

At the NIH, doctors and scientists complain to us about low morale and lower staffing: The NIH’s Vaccine Research Center has had many of its senior scientists leave over the last year, including the director, deputy director and chief medical officer. “They have no leadership right now. Suddenly there’s an enormous number of jobs opening up at the highest level positions,” one NIH scientist told us. (The people who spoke to us would only agree to be quoted anonymously, citing fear of professional repercussions.)

The CDC has experienced a similar exodus. “There’s been a large amount of turnover. Morale is low,” one high level official at the CDC told us. “Things have become so political, so what are we there for?” Another CDC scientist told us: “I used to be proud to tell people I work at the CDC. Now I’m embarrassed.”

Why are they embarrassed? In short, bad science.

The longer answer: that the heads of their agencies are usinTg weak or flawed data to make critically important public health decisions. That such decisions are being driven by what’s politically palatable to people in Washington or to the Biden administration. And that they have a myopic focus on one virus instead of overall health.

Read the whole thing. What’s genuinely despicable – evil – is using young children as pawns to push vaccines that may be responsible for more deaths than all previous vaccines combined.

Ruy Teixeira is a self-proclaimed liberal Democrat and author of a favorite blog on Substack, “The Liberal Patriot.” He has consistently warned his party that their focus subset of hard-left “progressive” issues is turning off both Hispanic and working-class voters. The party is captive and playing almost exclusively to white college-educated progressives at the expense of everyone else.

“We Democrats have a lab, two labs, actually, secret labs, one in Berkeley and one in Brooklyn, where we come up with ideas to completely piss off the working class, and it’s working wonderfully. … And they all have PhDs in pissing off the working class. Somehow, in my lifetime, the Democrats have gone from being the party of the factory floor to being the party of the faculty lounge.”

“Strong progressives clearly live in a different world than Hispanic and working class voters. In strong progressive world, views on abortion, gun control and January 6th fit neatly into an overarching set of sociocultural beliefs that are highly salient to them and increasingly drive the Democratic party’s priorities and rhetoric. Hispanic and working class voters lack this overarching set of beliefs—in fact, don’t share many of them—and are much more concerned with the basics of their material lives. It should thus be no surprise that these voters are increasingly losing interest in the party of abortion, gun control and January 6th. As Josh Kraushaar notes:

What pains Teixeira is how this completely undermines his best-known book, “The Emerging Democratic Majority,” which he wrote with John Judis. And what did they predict? From a review in Library Journal:

“The majority will be centrist, rather than leftist, and will be bolstered by African Americans, Hispanic and Asian minorities, women, professional employees, and the white working and middle classes that formerly made up the ‘Reagan Democrats.’ This majority’s geographic base will be the “ideopolises” large metropolitan areas linked by technology cities and suburbs. The authors conclude that despite the events of September 11, 2001, assumed to have enhanced President Bush’s popularity, a Democratic majority is soon to emerge when a presidential candidate synthesizes the aforementioned groups, who share similar Democratic economic and social interests.”

And I’m happy to waive them “goodbye.” Far be it from me to block their way. I’m sure Ruy, Paul, and other sensible Democrats (they do exist) will be there to pick up the pieces.