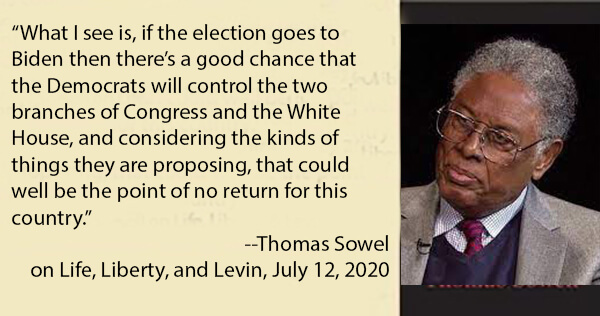 It is a testament to the power of the human mind to create blind spots to the Truth that so many conservatives and classical liberals who deeply admire and respect Thomas Sowell can still fail to see what he sees. This is understandable, especially for those with public reputations. The mind is designed to protect our self-image and our view of reality. It screens out threats, especially ones that would upend all that we know.

I have no illusions that this essay will persuade the staunchly certain. The mind responds to such certainty by creating blind spots to anything contradicting those certainties. I can only hope this essay chips away at the certainties of many who believe that in America we still have Politics as Usual. That the good fight can still be waged by our elected representatives.

Those able to see the threat in plain sight have taken the time to study, among others:

Hannah Arendt’s The Origins of Totalitarianism:

In an ever-changing, incomprehensible world the masses had reached the point where they would, at the same time, believe everything and nothing, think that everything was possible and that nothing was true. […] under such conditions, one could make people believe the most fantastic statements one day, and trust that if the next day they were given irrefutable proof of their falsehood, they would take refuge in cynicism; instead of deserting the leaders who had lied to them, they would protest that they had known all along that the statement was a lie and would admire the leaders for their superior tactical cleverness.

Aleksandr Solzhenitsyn’s The Gulag Archipelago (at least the abridged edition):

Oh, Western freedom-loving left-wing thinkers! Oh, left-wing laborists! Oh, American, German, and French progressive students! All of this is still not enough for you. The whole book has been useless for you. You will understand everything immediately, when you yourself — “hands behind the back” — toddle into our Archipelago.

“You don’t understand the class structure of American society,” said Smetana, “or you would not ask such a question. In the United States, the working class are Democrats. The middle class are Republicans. The upper class are Communists.”

Stephen Koch’s Double Lives: Spies and Writers in the Secret War of Ideas Against the West:

The aim was never to make Stalinist movies. It was to Stalinize the American glamour culture, while simultaneously giving the apparatus a cash cow capable of producing a large, untraceable supply of much-needed American hard currency to finance various operations around the world. It was also a refuge for favored cultural apparachiki like Bertolt Brecht and Hanns Eisler.

Political correctness is communist propaganda writ small. In my study of communist societies, I came to the conclusion that the purpose of communist propaganda was not to persuade or convince, not to inform, but to humiliate; and therefore, the less it corresponded to reality the better. When people are forced to remain silent when they are being told the most obvious lies, or even worse when they are forced to repeat the lies themselves, they lose once and for all their sense of probity. To assent to obvious lies is in some small way to become evil oneself. One’s standing to resist anything is thus eroded, and even destroyed. A society of emasculated liars is easy to control. I think if you examine political correctness, it has the same effect and is intended to.

Mattias Desmet’s The Psychology of Totalitarianism:

The fact that, in the current social climate, there is hardly any latitude to expose this decay in the exercise of power is highly dangerous. This is precisely the detrimental influence of the rise of the masses: It is so radically intolerant of dissent opinions that it labels any analysis of dangerous influence from institutions, companies, and so on as “conspiracy theory.” La passion de l’ignorance (the passion for ignorance) is flourishing like never before. And paradoxically, fanatical conspiracy thinking contributes to this problem because it makes more nuanced analyses less visible and more prone to stigmatization. They are tarred by the same brush and guilty by association.

If there is a gap in your reading, you owe it to yourself to fill that gap. Perhaps the 12 steps that follow will encourage you to do so.

But more importantly, consider what actions you are prepared to take when the no-turning-back escalation begins. And much sooner than you think.

As explained by 1980s-liberal Walter Karp, in 1905 J.E. Russell, then head of Columbia University Teachers College, pointed out, “How can we justify our practice in schooling the masses in precisely the same manner as we do those who are to be their leaders?”

A corrupt education, controlled by our betters, simply means keeping the larger population as workers and slaves. By taking over the Teachers Colleges, government can ensure that in K-12, children can remain mostly children by denying them the reading, writing, and thinking skills that would liberate them.

By now, the absolute corruption of “public education” by totalitarian ideology is obvious to all. Yet many still believe that such corruption is more due to ideology or ignorance rather than part of a long-term decentralized plan.

State control of education is the core feature of every totalitarian regime. And we have been tolerating it for decades. Talk to any kid in K-12 about what they learned in a public school that day and note how rare it is to hear any answer that relates to reading, writing, mathematics, real science, real history, and critical thinking.

Although written in 1981, Richard Mitchell’s The Graves of Academe (free online) nailed it:

Schools do not fail. They succeed. Children always learn in school. Always and every day. When their rare and tiny compositions are ‘rated holistically’ without regard for separate ‘aspects’ like spelling, punctuation, capitalization, or even organization, they learn. They learn that mistakes bring no consequences.

We now have more than one generation of children living in adult bodies. Children raising children. It is not an accident.