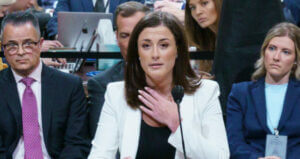 I knew instantly it was false when the news broke that a pro-life Catholic high school student from Kentucky had mistreated an elderly Native American veteran on the steps of the Lincoln Memorial during the March for Life a few years ago. I knew it instantly. It did not smell right.

Sad to say, many major pro-life leaders immediately attacked the kid. But I knew it was false, and it was.

In precisely the same way, I knew instantly it was false when Cassidy Hutchinson told the January 6th committee that Trump tried to hijack the presidential SUV and, in the process, choked a Secret Service agent.

Keep in mind, Trump is the man his haters said could not walk down a short ramp at a graduation ceremony. He is the man they said was so frail he could not drink from a cup except by using both hands.

When it is useful for them, this frail man becomes Jason Bourne—able to leap a great distance from a seated position and at the same time lay hands on the throat of a Secret Service agent.

Hutchinson also told the committee she heard the president say he didn’t care if armed men were trying to get through presidential security because they weren’t there to harm him. The implication of Hutchinson’s charge is that he allowed armed men past security all the better to invade the Capitol and kill Vice President Pence. Since Washington, D.C., has severe gun laws, one wonders why these armed men were not arrested instantly; unless they never existed except in certain fevered brains.

Hutchinson said under oath that White House Counsel Pat Cipollone confided to her that the president going up to the Capitol that day would have broken “any number of laws.” I have known Pat Cipollone for years. He is a very careful man. It does not pass the smell test that Cipollone would confide in the likes of Cassidy Hutchinson. What’s more, one wonders what laws Hutchinson thinks would be broken by the president going to an impromptu rally at the Capitol?

The usual suspects fell all over themselves praising the bravery of Hutchinson. Former Prosecutor Andy McCarthy, usually extremely careful, jumped with both feet onto the claim that Trump tried to overpower his security detail and hijack the presidential SUV. The next day, he backed off and settled on the possibility that the story may be false, but Hutchinson was not lying since she was merely repeating what she had heard someone say.

The goofballs over at The Bulwark did yet one more in a long line of tap dances on the grave of DJT’s presidency. Mona Charen said Hutchinson was a heroine and hoped her courage would be as courageous as most Republicans’ cowardice. Gay vulgarian Tim Miller said, “This afternoon a 26-year-old former assistant showed more courage and integrity than an entire administration full of grown-ass adults who were purportedly working in service to the American people but had long ago decided to serve only their ambition and grievance.”

This is a pattern among the Trump-haters, believing the most incredible things they hear.

Remember the pee-pee tape? They were told Trump hired prostitutes to urinate on the Moscow hotel bed where Barack Obama once slept. They really believed this.

Remember when he supposedly quoted Italian fascist leader Benito Mussolini? Trump retweeted an old saying—“better to live one day as a lion than 100 years as a sheep.”

It was tweeted from a troll account @ilduce2016. Get it? Get it? Trump quoted Mussolini! Trump is a fascist! We have proof!!!

NBC newsman Chuck Todd said, “That’s a famous Mussolini quote. You retweeted it. Do you like the quote? Did you know it was Mussolini?” It turns out the quote is attributed by the Oxford Dictionary of Proverbs to the Sultan of Mysore circa 1799.

These guys will believe anything as long as it works against Trump.

Do you remember when Trump said he was “king”? In February 2020, Trump survived impeachment. The New York Times quoted Ralph Waldo Emerson, “When you strike at the king, you must kill him.” Trump retweeted this. The Executive Editor of Bloomberg opinion said, “When you say the thing out loud: I am a king.” Law professor and frequent MSNBC talking head Barb McQuade said, “This may be the most sinister tweet Trump has ever posted. He is comparing himself with the king and threatening to use his powers for revenge on those who questioned his abuse of power.” Even faded, nutball actress Mia Farrow joined the fun, “You are not a king.” This went on for days.

How about when Trump said he was “the chosen one”? In August 2019, as Trump walked toward the presidential chopper, he was asked about the impending trade war with China. He said no previous president had taken on China, then he glanced skyward, raised his arms, and said, “I am the chosen one. I am taking on China. I am taking on China on trade.” A writer at CNN said, “‘Chosen one,’ then, isn’t just rhetoric. It’s a deeply held part of who Trump is—and always has been.” Radical feminist Amanda Marcotte wrote at Salon, “Even for a bottomless pit of narcissism like Donald Trump, Wednesday was an exceptional day for self-aggrandizement.”

The very same day, a Christian radio host compared Trump to the King of Israel. The Daily Beast then wrote, “Trump Says He’s King of the Jews. The Bible Says Otherwise.”

One could go on and on about the lies they tell about Donald Trump. The Washington Post says Trump spouted more than 30,000 lies during his four years. Even that is a lie.

It is unfortunate that young Hutchinson has allowed herself to be used by the odious Liz Cheney and the unhinged folks on the J6 Committee. Maybe she didn’t lie, but the stories she told are false. In the end, she will probably become the conservative co-host on The View.