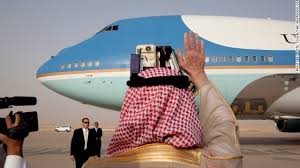 On Friday, I heard an ABC radio report which indicated that Obama’s initial meeting with the Saudis went longer than expected and that the King had cancelled the planned dinner.  The tone of the report, if not the exact words, implied that there was a high level of disagreement between Obama and the King.  The […]

There are 3 comments.
But you can't read them because you're not signed in!