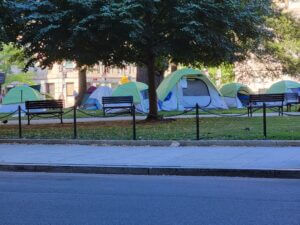 The new tent city. The Veterans Administration building is in the background.

Like all American cities, Washington DC has a homelessness problem and, like most cities, handles it badly.  An apparently permanent tent city at McPherson Square has been growing in size. Someone (the city?) has provided a portable toilet at one end of the block but there is no running water and local businesses do not welcome non-customer use of bathrooms. These conditions and this density would be regarded as unacceptable in any state or federal park campground.

It is not as if DC (or the feds) are powerless to clear out the park.  Attempts of the homeless to camp out in Lafayette Square (one block away) are quickly suppressed, presumably to preserve the White House vista for tourists and not embarrass the USA with photos of the White House in the background of a makeshift hovel. 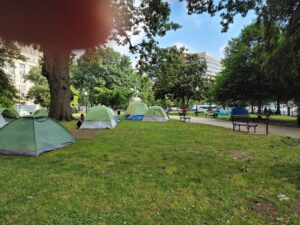 It is not clear who provided all the tents.  Are there property rights involved in the issuance?  Some evolving communal code?  City employees and contractors (and employees of some local businesses and real estate interests) routinely tend the flower beds and remove trash (lots of it).

Is there a solution?  How much should a solution involve sanctions of one kind or another? Is there a useful carrot or a stick that can be fairly applied?  Is surrender to the pathology and issuance of more tents the answer?

I am not optimistic. Urban politics is hopelessly stupid and corrupt. And history is full of failed, mostly punitive measures.

The British Experience. In Britain at the close of the Middle Ages, there was a problem of unemployed people from rural areas drifting into the cities and towns to look for ways to make a living.  Begging and property crime were constant problems.  Under Henry VIII begging licenses were issued only to the truly disabled.  Anybody else panhandling could be imprisoned or executed.

There was also a practice known as “passing” in which a vagrant would be shipped out of town through other jurisdictions until he arrived at his home parish. The moral basis for this was that it was unfair for other communities to have to feed, employ, and house the vagrant because his own community of origin held that obligation. However, the amount of money spent by Parliament on transport for “passing” vagrants became prohibitively expensive around the same time the British got the bright idea to send vagrants and petty property criminals to the colonies as indentured servants.  But then the American Revolution took away one of the main dumping grounds.

Vagrancy continued to be treated as a crime and recognized as a source of other criminal activity. The Penitentiary Reform Act of 1779 in the UK made prison more of an option. Long sentences in local jails had always been impractical—diet and hygiene issues would kill inmates in a short time anyway and the dozens (hundreds?) of listed crimes that could incur the death penalty did not require prison time.  (Hanging for property crimes was far more common per capita in the southern, wealthier parts of Britain.  Maybe there was less to steal in the north and in Scotland, Ireland, and Wales—or maybe they were better at getting away with it.)

In 1787, there began the first transport of unfortunates to Australia.  Oddly enough, the departure of 150,000 to 200,000 petty criminals did not make a dent in the rates of property crime or vagrancy.  By the 1860s, Australians objected to receiving undesirables, and the practice ended in 1868.

Today, the UK has an estimated 210,000 homeless which (per capita) is worse than the US. So, the problem of vagrancy, disconnectedness, and homelessness remains unsolved despite centuries of policy experience in that country.

Vagrancy in the USA. Vagrancy laws in the USA were voided by Papachristou v. City of Jacksonville, 405 U.S. 156 (1972) as “constitutionally vague” and thus subject to abuse.  The rather colorful local statute that SCOTUS voided read as follows:

Rogues and vagabonds, or dissolute persons who go about begging, common gamblers, persons who use juggling or unlawful games or plays, common drunkards, common night walkers, thieves, pilferers or pickpockets, traders in stolen property, lewd, wanton and lascivious persons, keepers of gambling places, common railers and brawlers, persons wandering or strolling around from place to place without any lawful purpose or object, habitual loafers, disorderly persons, persons neglecting all lawful business and habitually spending their time by frequenting houses of ill fame, gaming houses, or places where alcoholic beverages are sold or served, persons able to work but habitually living upon the earnings of their wives or minor children shall be deemed vagrants and, upon conviction in the Municipal Court shall be punished as provided for Class D offenses. [up to 90 days and $500 fine].

The fact that the arrest that became the subject of the case involved two white women in a car with two black men in northern Florida made it highly likely that the law was being used for other purposes and highlighted the potential for abuse. 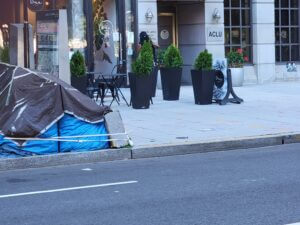 Encampment in front of ACLU HQ.

On the positive side of subjective vagrancy law enforcement, in the old days (pre-Papachristou) whenever the forecast called for very cold nights, the DC police used to routinely arrest those sleeping on grates and in alleys on a nominal vagrancy charge, keep them in a heated prison cell overnight and let them go in the morning.  Years ago, an old retired cop said to me that “the ACLU forced us to let them freeze to death.”

Do we need a new stick, new sanctions? We really don’t want to imprison the poor nor ship them to outer colonies once Musk and Bezos establish them.  And as for passing, the parish of origin is usually the projects or some other poverty center within the same urban community.

Drugs, family dissolution, and/or mental illness are most often root causes of chronic homelessness. The listless, depressed people in McPherson Square have clearly lost some important personal battles.  Helping them remain in that condition by issuing tents seems vaguely cruel.  But should we force people to be rescued, to be housed, and forced into mentally and physically healthy routines by means of legal sanctions?  The latter seems like a slippery slope with respect to personal freedom but what is the alternative?