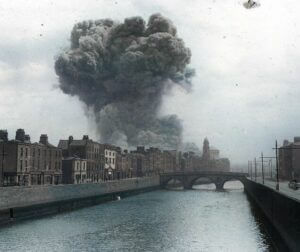 A century ago Tuesday, the Irish Civil War began on the streets of Dublin city. The war was fought between two different branches of the Irish Republican Army which had waged a guerilla war against the occupation forces of the United Kingdom in Ireland for the previous two years. This new war, which was to last over a year, was a war of the brothers.

Some background first. At the end of the Irish war of independence with Britain, a treaty was signed in December 1921 between politicians of Sinn Fein representing Ireland and the Liberal Tory coalition representing the UK — the Anglo-Irish Treaty. This created the Irish Free State, a self-governing dominion nation with limited independence from the UK for the 26 counties of southern Ireland, and recognised the already living state of Northern Ireland which contained the other six counties of Ireland.

The Dail (Ireland’s Parliament), four of Ireland’s seven governing Cabinet members, the newspapers, the church, and most importantly, most of the population of the new state accepted it. Each had its reasons but one of the principal ones was the belief of one of the heroes of Irish, independence Michael Collins (a leader of the IRA, Cabinet Member, and Chairman of the new Provisional Government), that whilst it did not give full independence to Ireland, it would give the freedom to achieve it peacefully over time (on which he was proved right).

However, not everyone did. Many members of the Dail Eireann rejected the Treaty and would not abide it. The leader of the Dail President Eamon De Valera refused to accept the Dail vote for the Treaty. He led his supporters out of the Dail in protest, splitting the Sinn Fein party and damaging democracy in the newborn state. However, he and they were not the true danger. The majority of another more powerful group did not accept the new situation — the IRA.

The IRA was split on the Treaty — the moderate or more realistic members supported it. The diehards and the idealists were appalled by it. Many of these people had fought a sustained campaign against British rule for several years and were in no mood to compromise, they saw only total victory as legitimate — a 32-county independent republic for Ireland. This, of course, was something beyond what Britain would be willing to grant, a fact that Collins who led the negotiating team and De Valera who chose it knew.

Essentially, the factions represented two different themes of Irish nationalism, the moderate pragmatists and the idealistic die-hards; as the year of 1922 took shape, each side began flexing its muscles. It soon became apparent to many in Ireland that war was coming again. The Anti Treaty IRA in April rejected the authority of Dail Eireann and began flouting laws it made from early that year. Several members carried out robberies, revenge killings, and shot at retreating British soldiers departing Ireland. Some also began to occupy as many garrisons as they could. In March, they occupied the Four Courts (building seen above) and made it their new base, miles from the Provisional Governments headquarters.

Collins and the Provisional government could only watch in horror at what was going on, but they needed time to build up forces to resist the anti Treaty IRA. They were recruiting, training, and building a new army, but most of the talented and best soldiers had rejected the Treaty; the Pro Treaty were outnumbered. Collins also wanted to see what way the Irish people were voting before he took strong action. In June of that year, elections to the new Dail (in short, a referendum on the Treaty) was called.

Nevertheless, Britain began calling on Collins and the new government to act, as they were appalled by the situation in Ireland. They feared a new republican government taking shape in Ireland which they did not want. They also feared for Northern Ireland. When senior British soldier Sir Henry Wilson was killed by members of the IRA in London, acting on orders from someone in Ireland, the British sent an ultimatum to Ireland’s new government — take action against the Anti Treaty IRA or we will.

The Anti Treaty IRA gave Collins the perfect excuse by kidnapping a Free State general days before. The government gave the Anti Treaty IRA a timeline — surrender or be destroyed. After gaining a mandate of voters (Pro Treaty parties got 70% plus of the vote), the words of the UK ministers, and the much more hardline members of the Provisional government arguing for it, Collins realised time was up. Either the Anti Treaty goes or he and his government do. As such, on 28th June 1922, the orders were given and the Four Courts was shelled.

The Battle of Dublin began and, with it, the Irish civil war. A war that was to claim the lives of some of Ireland’s bravest patriots (including Collins and Griffith and many IRA heroes of both sides) and leave the country devastated morally physically and spiritually for decades.