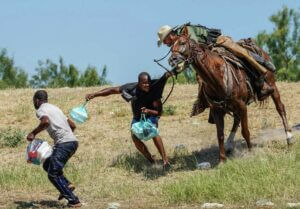 A week ago the San Antonio Express-News reprinted an article from the Houston Chronicle about a controversial challenge coin circulating among Border Patrol officers.  The article repeated the long-since debunked accusation that the mounted officers depicted on the coins were whipping immigrants at the border, and in fact stated it more than once. I sent an email to the editor of the paper and he replied that he’d look into it. My message:

The EN today ran a Houston Chronicle story from 5 days ago that contained a blatant falsehood. Specifically, it said: “Images of U.S. Border Patrol agents on horseback using whips to expel a group of Haitian migrants from a river encampment in Del Rio shocked the nation last year, becoming instant and indelible symbols of the crisis unfolding at the border.”

And later: “As reported by the Los Angeles Times, the coins depict a Border Patrol agent with a whip tugging the shirt of a Haitian immigrant.”

The whip accusation has been roundly debunked and any responsible journalist should know that. There is no reason to repeat a blatant lie other than to support a political position on border enforcement.  If you had any integrity you would print a retraction.

He sent me a polite email that he would look into it.  Yesterday he emailed me that he had forwarded my email to the Chronicle editor and after a discussion with him they changed the articles on both newspaper websites.

To say that I was surprised is an understatement. Maybe if we keep after these guys with specifics they will be forced to actually show some integrity. I usually just shrug this stuff off but that Chronicle reporter has to know now that she will get called out for that sort of stuff. I’m usually too tired to fight this crap but I guess we need to never stop pushing back.