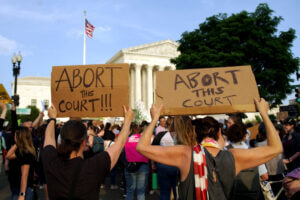 Last week, the Supreme Court delivered two blockbuster opinions. The first, New York State Rifle & Pistol Association, Inc. v. Bruen, struck down a New York state law provision that required any person who wished to carry a concealed handgun in public to first demonstrate to a public official that they had “proper cause” to do so for self-defense. In practice, this meant that applicants had to show that they faced a special risk above and beyond the ordinary risks that everyone runs in society. The second, Dobbs v. Jackson Women’s Health Organization, put an end to the forty-nine-year period in which Roe v. Wade (1973) guaranteed a constitutional right to abortion.

The response to both these decisions was strong and emphatic—from both sides. However, because the six conservative justices stuck together for both decisions, the left howled far louder than the right. Sadly, advocates on both sides treated their positions as self-evident truths, ignoring difficult conceptual and administrative challenges. Thus, in Dobbs, there was no middle ground. Forces on the right took great pleasure in concluding that Dobbs is a “triumph of democracy, constitutionalism, and courage,” and that the court rightly rejected living constitutionalism and returned the question of abortion rights to the people. The liberal dissenters asked not whether the people had the right to regulate abortion but rather whether each woman had the right to decide for herself whether to have a baby. By throwing the issue back into the hands of legislatures, the Supreme Court gave only modest comfort to many states, such as Illinois, that decided to protect Roe, while others—like Indiana, Wisconsin, Missouri, and Iowa—sought to reinstate restrictions that could turn the clock back beyond the bad old days before Roe.

Sadly, in these cases neither side thinks hard about how individual rights relate to legislative power under our Constitution, which provides ample place for both personal autonomy and popular self-government.

In sorting out this mess, start with the evident tension in Bruen between the conservative position on strong individual gun rights and the constitutional text, which reads:

A well regulated Militia, being necessary to the security of a free State, the right of the people to keep and bear Arms, shall not be infringed.

The easiest way to integrate the two clauses of the Second Amendment is to observe that the first one states the reason for the protection of the people’s right. That, in turn, requires looking back to Article I, Section 8, clauses 15 and 16, which provide for the division of authority over the militia between the states and federal government. On this view, it is a mistake to treat the first clause as surplusage, because it operates as a backstop so that heavy-handed federal regulation of guns does not prevent the state from organizing its own internal affairs. But if this is right, then District of Columbia v. Heller (2008) must be wrong, because no federalism issue arises in regulating what happens in the District of Columbia. McDonald v. Chicago (2010) has to be wrong as well, for if the Second Amendment is intended to protect state autonomy, how can it be read to hamper internal state activities?

Heller and McDonald now stand unchallenged, so the Amendment’s second clause cannot create an absolute right for all places at all times. The key question is, how strong must the justifications be for limiting gun use for such limitations to stand? Justice Breyer, writing in dissent, has the worst of the argument when he says that the matter is so complex that local governments should have virtual carte blanche to regulate gun use while taking into account local variations, such as those between urban and rural areas. But Heller required some higher scrutiny, most likely a form of intermediate scrutiny, which examines both the means and ends of a given statute.

The New York law fails under this strain of scrutiny. The Second Amendment guarantees more than the right to bear arms in one’s kitchen or to keep them in a locked safe. The ordinary meaning of the constitutional text is that you can bear them anywhere. So, where is the threat that makes concealed carriage dangerous enough to justify restriction? New York could have insisted that anyone who bears a gun in public must take prior training in its proper use, but the individual applicants in Bruen had done that. It could have imposed minimum age requirements, like those imposed for driving and for drinking. But the applicants in Bruen were above age. Given these alternatives, the burden should be on New York to show how, in light of the carriage of concealed weapons by trained personnel in other states, that practice presents a threat to the people of New York.  However, not a hint of those risks appears in the record. Instead, the dissent only makes a reference to the grisly May 14 supermarket massacre in Buffalo, which did not involve the use of a concealed weapon. So, under the current version of the Second Amendment, the law should have been struck down as overbroad.

Roe presents the opposite picture. Here, the case for a strong constitutional right to an abortion does not address any variations in local conditions or community norms that might sustain a criminal statute. In 1973, Roe referred neither to an explicit constitutional text nor to a well-established practice when it overturned the democratic judgment in every state of the Union with an opinion that I regarded as unsound then, and which has not aged well, as even the late Ruth Bader Ginsburg acknowledged.

So why the intellectual shift? On the liberal side, the arguments boil down to two points: first, the individual autonomy of a woman—my body, my choice—with respect to some of the most important decisions of her life; and second, the disproportionate impact that Dobbs would exert on poor women, especially of color. If such poor women of color find themselves in a conservative state, they will find it both more costly and more dangerous to seek an abortion than before Dobbs.

It would be foolish to deny that these are weighty considerations. However, the ultimate question is whether they have constitutional heft or whether they are considerations better left to legislative judgments. I think that a split verdict is warranted. On the first point, it is critical to give an accurate assessment of the asserted autonomy right of women in the abortion context, which stems from the women’s right to decide whether or not to enter into sexual relations. No one can force her to have a child, which is why the law of rape lies at the core of the criminal law. Messy interim cases exist, but if a woman voluntarily chooses to have sexual relationships and subsequently becomes pregnant, she is a guardian of her unborn child who must balance its interest against her own. The close interdependence between mother and child raises painful issues in cases of danger to the life or health of the mother, cases of rape or incest, or cases of children with serious or perhaps lethal birth defects. But none of these complications justifies abortion at will at any time during the pregnancy. Even Roe recognized this point in a backhanded fashion because it limited the right to abortion in the third trimester.

At this point, we must face Chief Justice Roberts’s question in his partial concurrence: how much further back does that fiduciary relationship go, given that the Mississippi statute allows abortions up to fifteen weeks? At that gestational age, one website reports: “At fifteen weeks pregnant . . . your baby is starting to see light.” A sonogram reveals the identical picture to an eagerly expectant mother that it does to a woman intent upon abortion. Can it be said that the fetus is not a baby solely because the mother doesn’t want to carry it to term? Indeed, the pro-life side asks Justice Roberts why legal protection should not extend before fifteen weeks. Moral arguments aside, abortion raises legal questions to which a generalized plea to individual autonomy does not offer a satisfactory answer.

The disparate social impact of abortion also does not seem to carry constitutional weight. If some think that legislatures should be able to take variable circumstances into account with guns, why not with abortions? Legislatures could offer state support for abortions or for newborn babies. Private foundations or charities could also fund abortions or child care. These rights might be tailored to a subset of the population, much like housing or school vouchers. This nagging question about the distribution of public funds and permissions looks wholly free form, something appropriate for legislative attention but not amenable to constitutional protection.

I understand the disappointment on the political left about both these decisions, but what I cannot understand is the outrage and defiance that frame their responses. Is it really helpful to attack organizations that supply pregnancy services but not abortion services? Is it really accurate to state that “shall issue” laws for concealed weapons mark the end of civic peace? We need to tamp down the rhetoric on both guns and abortions in order for the legislative and judicial process to work on both issues.