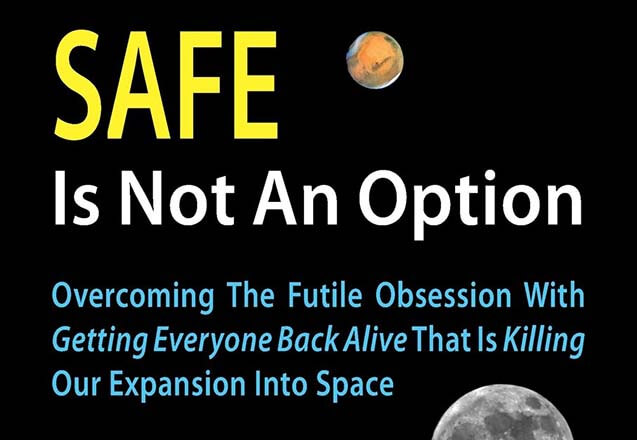 The successful expansion into space requires tradeoffs in cost and safety. But the government’s obsessively risk-averse regulations are preventing us from being able to make those tradeoffs. That’s the message of the new book by Ricochet member, CEI adjunct scholar and “recovering aerospace engineer” Rand Simberg. Safe Is Not an Option: Overcoming the Futile Obsession With Getting Everyone Back Alive That Is Killing Our Expansion Into Space is getting rave reviews from prominent experts, knowledgable politicians, and successful entrepreneurs.

Simberg notes that, throughout the history of exploration, science and technology has always entailed risk to the health and lives of the explorers. Yet, when it comes to exploring and developing the high frontier of space, the harshest frontier ever, the highest value is apparently not the accomplishment of those goals, but of minimizing, if not eliminating, the possibility of injury or death for the humans carrying them out.

In the decades since the end of the Apollo program, human spaceflight has been very expensive and relatively rare (about 500 people total, with a death rate of about 4%), largely because of this risk aversion on the part of the federal government and the wider culture. Whether in government programs or the regulatory approach for commercial spaceflight providers, our attitudes toward safety have been fundamentally irrational, expensive, and even dangerous,  generating minimal accomplishment for maximal cost.

Safe Is Not an Option entertainingly explains why this means that we must regulate passenger safety in the new commercial spaceflight industry with a lighter hand than many might instinctively prefer; why NASA must more carefully evaluate rewards from planned missions to rationally determine how much should be spent to avoid the loss of participants; and why Congress must stop insisting that safety is the highest priority. Such insistence is an eloquent testament to how unimportant they and the nation consider the opening of this new frontier.

You can find the book on Amazon, read a review by our own Mollie Hemingway at The Federalist, and follow Rand’s blog posts here and at PJM.