Some people are overly sentimental about animals.  They won’t go hunting.  They hate the idea of hunting.  They cannot even know how their food is made; touching it is disgusting or repulsive to them.  They’ll eat meat as long as they don’t know where it comes from.

Then there are the people who take it a step further and become vegetarians.

Then, there are those who become militant in their supposed respect of animals and become vegans (how do you know? They’ll tell you!).

I do not resemble any of those people.  I’m not opposed to hunting, though I’ve never gone.  I sometimes feel that a bow is more humane, other times that a swift death is a bigger blessing.  I prepare food, I don’t love the texture of raw meat, but I’m not horrified.  I see the blood and sinews and fat when I’m trimming up a pork shoulder.  It does not give me pause.  I know how sausage is made and I still love the product.

I am not a pushover in most ways.  I can tolerate blood and guts.  Many have complimented me on my vast sense of justice, aesthetics, and kindness (even recently).  But my cold, dead heart softens for certain animals with zero chances who still try, try, try to accomplish their various goals.  I cannot watch nature documentaries where the animals struggle to build their home only to have the den flooded or destroyed by fire, looking upon their former glory while sitting in their ashes.

This brings me to my current predicament. 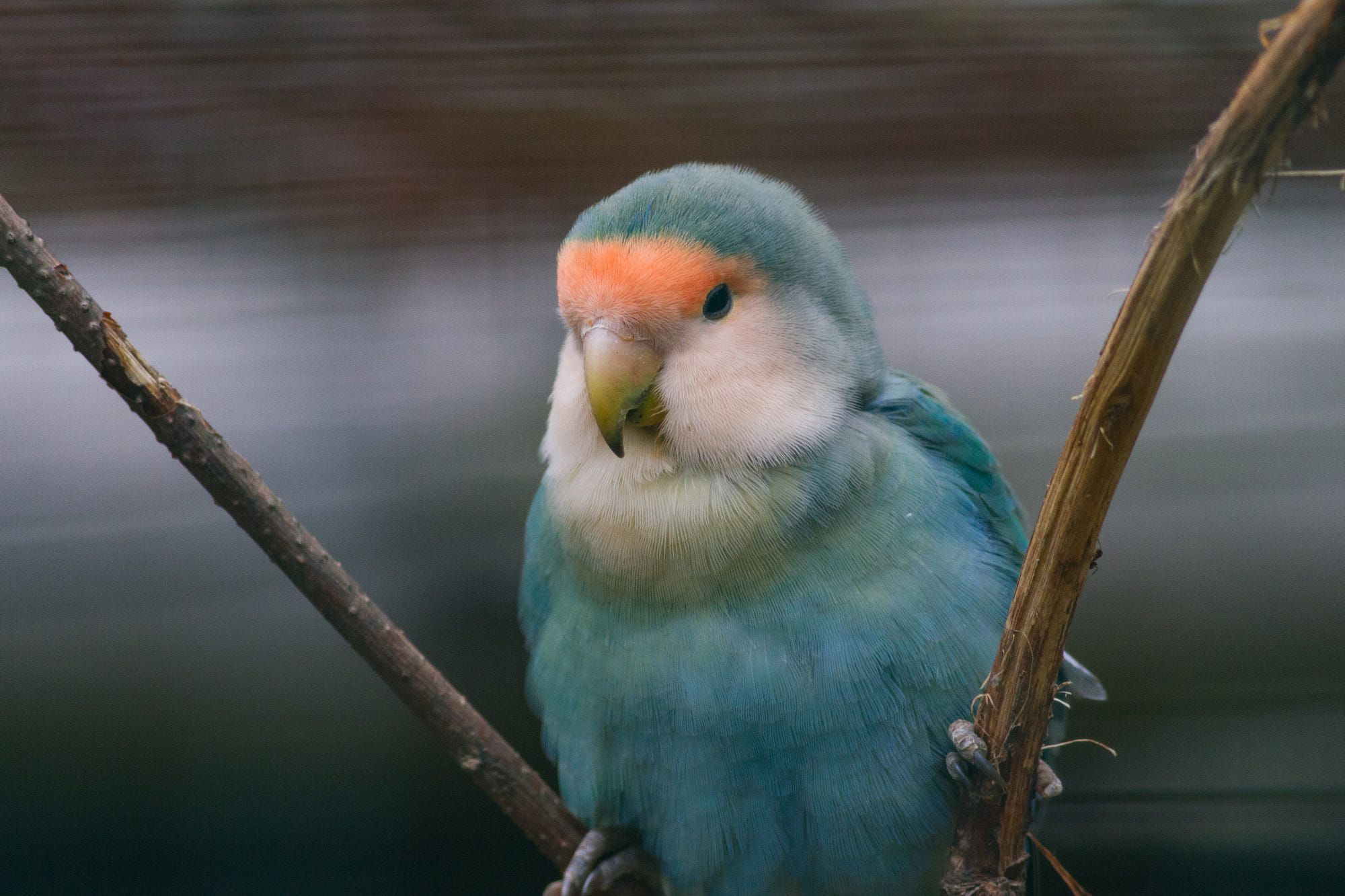 I have a lovebird.

I have a very prolific lovebird.

As the days get brighter and longer, the little hen senses the season.  She tears the newspaper at the bottom of her cage into shreds and places them into a round, creating an approximation of the nest she’d make if only I would provide better materials.  She settles down and then the time arrives.

She lays her eggs.

The male is completely unnecessary in this case, though she becomes much more amorous with my hand.  Eggs are laid in the compromised nest all the same.  Every other day, another egg appears.  Lovebirds like her lay anywhere between 5-8 eggs.  Last time, I did not know the protocol and kept getting rid of them each time one appeared.  Apparently, that only makes them agitated and more likely to replace the missing egg with another.  This time I decided to do research.  I waited.  I counted.  Every other day, I would ensure that she had food placed within reach; she dropped so much weight last time, I was afraid that she would die.  She had refused to move an inch from the eggs.  In nature (or with kinder owners, I suppose), the mate would be feeding her during this time.  Since she only had me and I’m an awful boyfriend, I put her bird pellets on a little paper disposable plate right next to her nest.  This disturbed her greatly, but adorned with birdie bread she was enticed to nibble and take a moment away from the eggs to eat and drink.

Normally, or in more pro-life circumstances, the eggs would begin to hatch by day 21.  Certainly, they would be hatched by day 28.  This is the time, approximately, that the educated people say the bird will finally give up on her eggs, determined they are duds, and will go back to life as usual.

Then it is acceptable to take the eggs out of the cage. 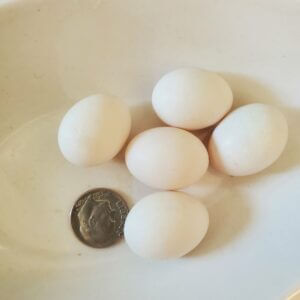 Dime is for size comparison purposes only.

Our bird, Princess Peach, did no such thing.  Day 21 came around and she dutifully sat.  She took breaks, longer and longer, but she always came back to rest on her eggs.  She eyed me jealously when I reached anywhere near them.  Not attacking, but certainly wary of my intentions toward her little potential chicks.  Day 25 came, all was much the same.

It was getting a bit unreasonable.  But there she sat.  Ever convinced that somehow these eggs would be the ones that hatched.  Last time was a fluke.  This time, this time, at least one would survive.  And so she sat still.  All day, all night.  Her feathers were dreary.  The nest was surrounded by droppings (she just hangs her backside out of it and goes).  But she was convinced.

I thought maybe I’d missed a day or two in my counting.  I didn’t date the calendar very well.

I waited another couple of days.

It was if nothing had ever happened.

When I put her back in the cage, she hopped down to the floor to see if her nest was there.  It was not.  She went back up, paced a bit, and then took a nap.

And I felt awful.  I feel awful.

This poor creature, with all of the hope she has in her stupid little bird brain and body, guarded these little infertile eggs as her most precious objects.

And so I can’t get rid of them.

I’ve done therapy for many, many years, so I’m fairly decent at being able to analyze myself.  Rationalization is a major vice of mine.  I can only say that it must be the symbolism of the eggs and the way the bird clings to them for dear life that is so upsetting to me.

Her life is charmed, our little Princess.  She fears no predator.  Her home is climate controlled with a warmer in the cage, because her owners enjoy their air conditioning.  Her food is top-notch.  Her veterinarian is a nationally-known bird specialist who did landmark surgery on lovebirds and wrote the paper on how to perform microsurgery on domesticated birds.  She has more love than she can handle and often expresses that to us in her screams when she needs us to stop loving her quite so much.

All the same, there is one drive of hers that she cannot explain and cannot fulfill.  She will not see chicks hatch.  With a life expectancy of approximately 15-20 years in captivity, she has many, many more seasons of disappointment ahead of her.

Somehow she still clings desperately to this hope, this drive.  She wills it to happen, despite all signs and all time indicating that her eggs are not going to hatch this time.  She still tends to her little dead eggs.  She tenderly sits on them and rotates.  She still sacrifices for them.  For the chicks that will never, ever be.

It is deeply upsetting to see this cycle.  Hopes, nurturing, inevitable failure.

And so the eggs sit on my counter.

I can’t throw them away like trash; they’re her most precious creations.  While they did not produce her most fervent result, they are so precious to her that I can’t bring myself to dispose of them.  Instead, I just look at them and feel sorry for her.

I think I’m getting old and sentimental.