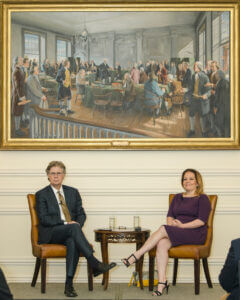 Ricochet and Hillsdale in D.C. teamed up to host a live taping of The Byron York Show featuring Mollie Hemingway. On June 15 at the Allan P. Kirby, Jr. Center, they discussed “The 2022 Election: The Status of Election Integrity in America and What the Republicans Should Do if they Win.”

The episode began with Hemingway and York discussing President Biden’s approval ratings and his unavailing efforts to place blame anywhere that isn’t where Joe Biden is. They discuss inflation, economic malaise, foreign policy calamities, rampant crime, civil unrest … and a country that feels like it’s on the edge of a precipice.

York also asked Hemingway for her opinion on primary elections, the 2024 presidential election, and the Jan. 6 Committee. He wondered, “What would a proper investigation of January 6th look like?” and Hemingway recounted the context of that fateful day.

After the taping concluded, the audience engaged in a Q&A discussion with the panelists.

Be sure to check out the photo gallery of the banquet and discussion here.