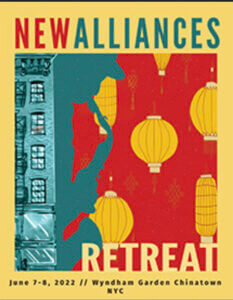 Last week, I attended a two-day conference in New York City titled, “New Alliances: Forging an American Strategy for Protecting Liberal Values.” The conference was sponsored by the Jewish Institute for Liberal Values with participation from Free Black Thought and the Chinese American Citizens Alliance of Greater NY (CACAGNY). The idea was to assemble prominent members of the Jewish, Black, and Chinese communities to brainstorm how to work together to fight for America’s founding classical liberal principles and against the illiberal and divisive ideologies plaguing our schools and society.

It was a terrific group of attendees from all over the United States and Canada, and a solid list of speakers and panelists. If you’re interested, you can watch many of the sessions here (Twitter) or here (YouTube). But as I’ve experienced after many of the similar conferences I’ve had the opportunity to attend over the past year or so, I left the event somewhat frustrated. Even within the sphere of anti-woke activists and thinkers, there are vast differences of opinions, and fundamental disagreements on tactics that make our fight harder. I thought I’d share with you a few of my observations.

Thinkers vs. doers. There is a clear split in this movement between the thinkers/writers/Tweeters and the activists on the ground. Every movement likely needs a firm intellectual foundation to be successful, and I am guilty as anyone for writing, as much as doing. However, the thinkers, mainly academics and public intellectuals, tend to believe we can win the cultural war against the woke with rational argument. Or worse, don’t believe this is a war at all. Straddling the political center, many of these individuals are reluctant to take a strong stand, fearful of cancellation (understandable), and terrified of being labeled either a right-wing conservative or a racist.

The doers aka activists, mainly in the K-12 education fight, tend to be more pragmatic and less fearful. These are the people organizing in their neighborhoods and schools, fighting legislation, and running for political office. Many, having personal experience with Communism from the former Soviet Union, Eastern Europe, or Maoist China, recognize the revolutionary nature of wokeism and its existential threat to freedom. However, even within this group there are naturally differences of opinion.

How aggressive do we need to be, and where are the lines we should not cross? Ban CRT legislation is a good example. Do we risk engaging in exactly the censorship we criticize or are we justified in removing from the classroom clearly toxic ideas? Similarly, with whom do we ally? Do we befriend often well-funded groups that are using the woke issue purely for political gains, or those with whom we do not agree on other important issues? There are no easy answers here.

There is also the question of our messaging. Are we for or against? Are we fighting (a word some of the “thinkers” believe we should not use) for liberal values like free speech and rational discourse, or are we fighting against illiberalism, indoctrination, cancel culture, and wokeism? The intellectual in me is sympathetic to the argument we need to fight for the values fundamental to our country. This is more the think-tank approach. The pragmatist (and pessimist) in me says no. The threat is existential and our messaging and mission must be to stop the woke takeover of America.

Related but more tactical is the discussion around diversity, equity, and inclusion (DEI) training. Again, there are two camps. Should we focus on alternative DEI training or should we be advocating to get DEI out of our schools, corporations, and government once and for all? The alternative DEI camp makes the point that we are too far down the path of DEI to abandon it and therefore we need to present an alternative to the toxic and divisive DEI being taught today. They often also believe we can reform these institutions by teaching color blindness or racelessness. I disagree. The institutions, schools especially, that have gone down this path are likely lost forever. We don’t need a milder, tamer form of DEI. The emphasis must be to stop the focus on group identity, eliminate any semblance of DEI, and go back to teaching proper history and civics.

There’s one last observation I’d like to share from this conference. Given the theme of “protecting liberal values,” there was a groupwide discussion amongst the attendees of how liberal values should be defined. To be clear, everyone’s intent was to reclaim the original meaning of liberalism, often referred to as classical liberalism, not modern, big-government, welfare-state liberalism. Whether trying to reclaim the word “liberal” is wise or even possible is a debate for another day, as are the differences (or lack thereof) today between classical liberalism, libertarianism, and conservatism. What was a bit eye-opening and disheartening was the consensus on what constitutes liberal values.

Freedom of speech, diversity of thought, fairness, equality, and democracy were the themes that were probably mentioned the most often. Never once mentioned, however, was free markets. Classical liberalism, which came out of the Enlightenment, and on which America’s founding principles are based, has two towering father figures: John Locke and Adam Smith. Loosely speaking, Locke on government, Smith on economics. We’re forgetting the Smith.

Along the same lines, there was a discussion of democracy itself. There seemed to be some agreement that democracy is the most basic value of liberalism, and that freedom is derived from democracy. This view reflects a fundamental misunderstanding of classical liberalism.

Freedom of the individual is the core value of liberalism. For by maximizing freedom, and allowing private incentives to work as unmolested as possible, we maximize the greater good. This was Smith’s great insight of the invisible hand. Government, a necessary evil, exists primarily (or solely, for a radical libertarian) to preserve (or maximize) freedom. Democracy (or republicanism), however we define it and structure it, is simply the best (or least worst) type of government we know of to preserve individual freedom.

Broadly speaking, our freedoms face four threats: foreign powers, domestic criminals, a democratic majority, and our power-hungry government. Our constitution, a product of wisdom and compromise, was designed to protect us against these four threats. The ability to raise an army against foreign threat, police, and courts against domestic threats, and a bill of rights and separation of powers against the threat from the tyranny of the majority and of our own government. Our founding fathers were wise to the fact that there were tensions and tradeoffs between protecting against each of these types of threats, and built both flexibility and “checks and balances” into our system of government.

These tensions are still with us today, and there are many debates we can (and should) have regarding these tensions. However, by emphasizing democracy rather than freedom, we have allowed ourselves to fall into a trap, letting the media set the terms of debate, over such things as voting rights. Good government has little to do with how many people vote. It has a lot to do with whether or not we elect wise and virtuous leaders. This requires good incentives and proper education. Moreover, the focus on democracy (i.e. voting) rather than freedom plays right into the hands of the purveyors of identity politics. Finally, our reluctance to support freedom has allowed the progressive left to attack the tenets of free speech, without which there can be no democracy or free markets, no scientific progress, or religious freedom.

The reason for my tangent on liberalism and government is this. Even in a gathering of people all genuinely professing to stand for classical liberal values, many with fancy degrees from fancy universities, there are fundamental misunderstandings on what represents these core values. For several generations, our schools, even our elite ones, have not properly taught America’s founding values and history. Worse, today, our schools are either not teaching these values at all, or are teaching our children to despise, and dismantle them. For our country to survive, this must be fixed. We must not only teach, but inculcate in our children an appreciation for those principles that have made us the freest and most prosperous nation in the history of the world.

I also want to share with you the last few episodes of the podcast I co-host on Ricochet with Beth Feeley, Take Back Our Schools. We’ve had some terrific conservations about the dangers of social-emotional learning (SEL), school choice, and classical education. We also have some great guests lined up for our next few episodes, including former U.S. Secretary of Education, Betsy DeVos. I hope you’ll have a listen and let us know what you think.