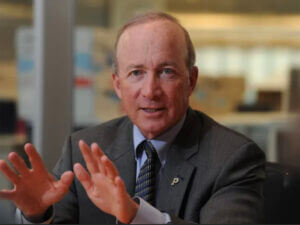 As a young Capitol Hill staffer in the early 1980s, one of the people I ran into fairly frequently was then-chief of staff for first-term GOP US Senator Richard Lugar (R-IN) Mitch Daniels. I was the press secretary to 28-year-old freshman US Rep. John Hiler (R-IN). I often spotted Lugar and Daniels doing morning or mid-day runs together on Washington’s Mall. Lugar featured arguably the best crop of Senate chiefs of staff during his own illustrative 24-year Senate career. Daniels set the standard.

Present company excluded, Indiana’s congressional delegation then had an ambitious, talented, and star-studded delegation and staff. Lugar’s junior Senate colleague, Dan Quayle, would become Vice President in 1989. US Rep. Dan Coats, who succeeded Quayle in the House, became a US Senator (twice), US Ambassador to Germany, and Director of National Intelligence.

After a stint as North American President of pharmaceutical giant Eli Lilly, Daniels, now 73, would serve as Director of the Office of Management and Budget during the George W. Bush Administration. That was followed by two terms as Governor of Indiana, where he unseated an incumbent Democrat in 2004. I still follow many of my then-fellow Indiana congressional delegation staffers who became policy, political, and media legends. I married one.

During his tenure, Daniels cut the state government workforce by 18%, cut and capped state property taxes, balanced the state budget through austerity measures and increasing spending by less than the inflation rate. In his second term, Daniels saw protest by labor unions and Democrats in the state legislature over Indiana’s school voucher program, privatization of public highways, and the attempt to pass ‘right to work‘ legislation, leading to the 2011 Indiana legislative walkouts. During the legislature’s last session under Daniels, he signed a ‘right-to-work law‘, with Indiana becoming the 23rd state in the nation to pass such legislation.

Much to the chagrin of many, he eschewed a race for President in 2012. Most agree he would have been formidable.

In 2013, upon retiring from the statehouse, he settled into a new role as University President, succeeding my wife’s cousin, the estimable Dr. France Cordova. He also became one of America’s finest commencement speakers.

College and high school commencements are a feature of late Spring. Daniels consistently gave the season’s best speeches. They often made the news. In 2021, he spoke to Purdue’s graduates about risk-taking and the pandemic.

The risk of failure, of a hit to one’s reputation, or just that the gains don’t outweigh the costs, all these can deter or even paralyze a person out of fulfilling the responsibility someone has entrusted to them. Should I make this investment, or husband my cash? Take that job offer, or stay where I’m comfortable? Engage in this debate, or sit silently?  Choose this life partner, or play it safe?

This last year, many of your elders failed this fundamental test of leadership. They let their understandable human fear of uncertainty overcome their duty to balance all the interests for which they were responsible. They hid behind the advice of experts in one field but ignored the warnings of experts in other realms that they might do harm beyond the good they hoped to accomplish.

Sometimes they let what might be termed the mad pursuit of zero, in this case zero risk of anyone contracting the virus, block out other competing concerns, like the protection of mental health, the educational needs of small children, or the survival of small businesses. Pursuing one goal to the utter exclusion of all others is not to make a choice but to run from it. It’s not leadership; it’s abdication. I feel confident your Purdue preparation won’t let you fall prey to it.

It would be easy to think that Daniels found a nice landing pad at Purdue as a reward after decades in the trenches. Purdue has long been one of America’s finest land grant universities, with renowned engineering, science, and agriculture colleges. But no moss grew under Daniels’ feet at Purdue. His flinty, no-nonsense, and common-sense policies continued as a capstone to a brilliant career. The American Enterprise Institute’s Frederick Hess summarizes Daniels’ Purdue record well:

At a time when many college presidents keep jacking up tuition while blaming circumstances beyond their control, Daniels had a more straightforward response: He kept tuition flat. For a decade. That’s right, for the last eleven years, Purdue has frozen tuition. Meanwhile, Daniels also cut room and board costs by five percent—meaning it’s cheaper to attend Purdue now than when Daniels took office a decade ago.

You’d think Daniels would be the featured speaker at every higher education conference and on speed-dial at the Biden Department of Education. The fact that this isn’t the case says everything one needs to know about the state of the higher education debates.

At a time when higher education has been overrun by political agendas, Daniels firmly but graciously stood up to them. Pressed to engage in the usual theatrical apologia after a handful of white supremacist posters appeared on campus, Daniels instead calmly explained, “This is a transparent effort to bait people into overreacting, thereby giving a minuscule fringe group attention it does not deserve, and that we decline to do.” And that was that. Rather than allowing the most maladjusted 1 percent on right or left to drag Purdue into their personal psychodramas, he offered a master class in how mature leaders keep their eye on the ball.

Daniels did what college presidents are supposed to do but too few do today: He provided a model of statesmanship, wisdom, and moral authority for his campus and his nation. In his occasional Washington Post columns, he offered principled, nuanced discussions of timely issues. He made the principled case for why college athletes shouldn’t be paid, highlighted the importance of protecting Ukrainians from Russian aggression, and explained the moral obligation of governments to be responsible stewards of public funds.

As Hess notes elsewhere, Washington Post columnist and noted conservative George Will said in 2016, “Purdue has the President that the nation needs.” Daniels announced this weekend that he’s retiring at the end of the year.

Daniels is a spry 73, six years younger than the current occupant. It’s not too late.