You were only 33 and we didn’t expect you to leave us so quickly. Cerebral palsy and the physical and mental health challenges that went with it never slowed you down or soured your attitude. Everything was humorous and everyone was your friend. 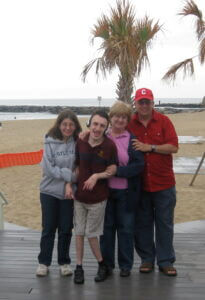 26 years at home where you kept our house laughing and busy all the time. When I wasn’t working you were my shadow and I loved every minute of it. Then your medical issues really began and we spent the next 2 years in the hospital and a nursing home. I’m sorry I couldn’t get the court to understand what they were doing to you. We were blessed to have the county case manager we had & she found the McGinley House for you. What a  blessing they turned out to be for you. Nobody could have given you a better life these last 5 years.

Your last round of gastro issues looked like another minor issue that would be solved with another corrective surgery.  When you had to go back to the ER a week later we never anticipated that in under an hour we would be presented with tubes & permanent sedation or hospice.

The week in hospice was the most time we had with you since COVID began. It was difficult but very special in its own way. I can’t write anything more about that cause I’m crying again.

12 weeks since you went home to G-d and we are still amazed by the number of people who have been touched by you. Not a day goes by that we aren’t quoting something you said or reliving something you did to make us laugh.

I just hope that putting all this on paper will help me come to grips with it. 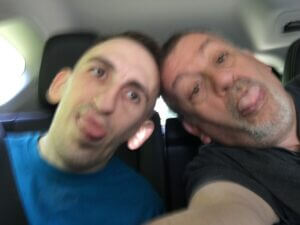 Rest In Peace my son – I love you.