One theory about the J6 Committee is that its goal is to render President Trump ineligible for the 2024 ballot. Like the lawsuits brought against Republican Congressional Representatives  Marjory Taylor Green, Madison Cawthorn, Tom Tiffany and Scott Fitzgerald, and Wisconsin Sen. Ron Johnson, the objective is to disqualify Donald John Trump under Section 3 of the 14th Amendment to the US Constitution:

No person shall be a Senator or Representative in Congress, or elector of President and Vice President, or hold any office, civil or military, under the United States, or under any state, who, having previously taken an oath, as a member of Congress, or as an officer of the United States, or as a member of any state legislature, or as an executive or judicial officer of any state, to support the Constitution of the United States, shall have engaged in insurrection or rebellion against the same, or given aid or comfort to the enemies thereof. But Congress may by a vote of two-thirds of each House, remove such disability.

Although this is laughable on its face (no “insurrection” took place much less was there any action on the part of any Republican officer accused to engage in such) let’s just imagine that the Democrats put on their “show trial” and create a record to be presented to a court. Let us further suppose that said court actually issues a decision, upheld on appeal, that President Trump is disqualified from running for President in 2024. Will this be a victory for the Democrats?

I would argue that this is the last thing they should want. Why? Because President Trump was a reaction to the Progressive takeover of the Democratic Party, not the cause of Progressive setbacks in 2016-2020. President Trump personified and articulated the concern of millions of patriotic Americans who felt abandoned by politicians of both parties. So when GOPe candidates in 2016 brought out all the bromides that had brought in campaign funds but never stopped and hardly slowed the progressive march through our institutions and government it is unsurprising to the “uninformed” and ordinary folks that Trump got the nomination. Since I was “informed” and expected him to fail in the electoral contest and was reluctant for his candidacy since I was so well “informed” I didn’t think he could win.

But I was delighted he did. His policies delighted me. His pre-pandemic economic moves were masterful. The country, even with the drag of the Russia hoax, was regaining its footing as a democratic republic. And then came the pandemic and the vultures swooped in and took away a slam-dunk reelection. The V-shaped economic dip was such that in November it was not all that surprising that the election day returns before the voting “pauses” were definitely favoring President Trump. And then things went south under what remain murky conditions. GOPe had their revenge and it was time to move on.

The people who voted for Trump will not change their minds or their political inclinations. They have watched as the levers of power have been turned against citizens. They will not come “home”, although it remains to be seen whether they can be tamed. They are ready to rally another politician who will champion their cause. 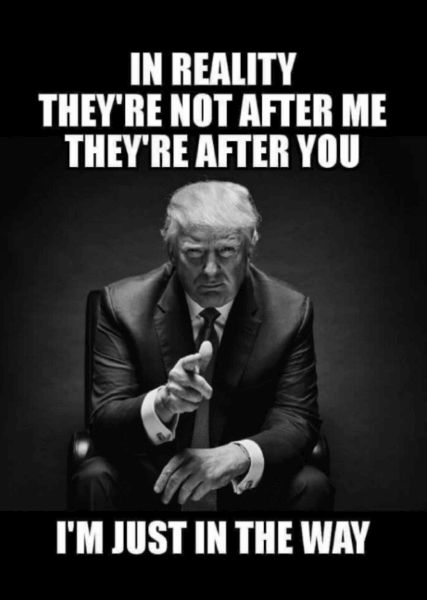 If he is no longer in the way, the problem doesn’t go away for the Democrats. It only becomes more obvious that it was never about Trump.