The Polish Home Army was trying to liberate Warsaw before Russian forces arrived. Winston Churchill wanted to help the Home Army but Roosevelt did not want to offend Stalin before the Yalta Conference. Stalin had no intention of coming to the aid of the Home Army. Eventually, aid did come from Britain and the United States, but too late to win the battle.

The Polish people are not as confused about who Putin is as are some people who don’t live in Russia.

Most soldiers of the Home Army (including those who took part in the Warsaw Uprising) were persecuted after the war; captured by the NKVD or UB political police.

They were interrogated and imprisoned on various charges, such as that of fascism. Many of them were sent to Gulags, executed or disappeared.

Between 1944 and 1956, all of the former members of Battalion Zośka were incarcerated in Soviet prisons. In March 1945, a staged trial of 16 leaders of the Polish Underground State held by the Soviet Union took place in Moscow – (the Trial of the Sixteen). The Government Delegate, together with most members of the Council of National Unity and the C-i-C of the Armia Krajowa, were invited by Soviet general Ivan Serov with agreement of Joseph Stalin to a conference on their eventual entry to the Soviet-backed Provisional Government.

They were presented with a warrant of safety, yet they were arrested in Pruszków by the NKVD on 27 and 28 March. Leopold Okulicki, Jan Stanisław Jankowski and Kazimierz Pużak were arrested on the 27th with 12 more the next day. A. Zwierzynski had been arrested earlier. They were brought to Moscow for interrogation in the Lubyanka. After several months of brutal interrogation and torture, they were presented with the forged accusations of collaboration with Nazis and planning a military alliance with Germany. Many resistance fighters, captured by the Germans and sent to POW camps in Germany, were later liberated by British, American and Polish forces and remained in the West. Among those were the leaders of the uprising Tadeusz Bór-Komorowski and Antoni Chruściel.

George Orwell had something to say about British criticism of the Warsaw Uprising on 1 September 1944:

I want to protest against the mean and cowardly attitude adopted by the British press towards the recent rising in Warsaw. … One was left with the general impression that the Poles deserved to have their bottoms smacked for doing what all the Allied wirelesses had been urging them to do for years past,. … First of all, a message to English left-wing journalists and intellectuals generally: ‘Do remember that dishonesty and cowardice always have to be paid for. Don’t imagine that for years on end you can make yourself the boot-licking propagandist of the Soviet régime, or any other régime, and then suddenly return to mental decency. Once a whore, always a whore.’

The young and the old fought for Poland in the 1944 Warsaw Uprising. 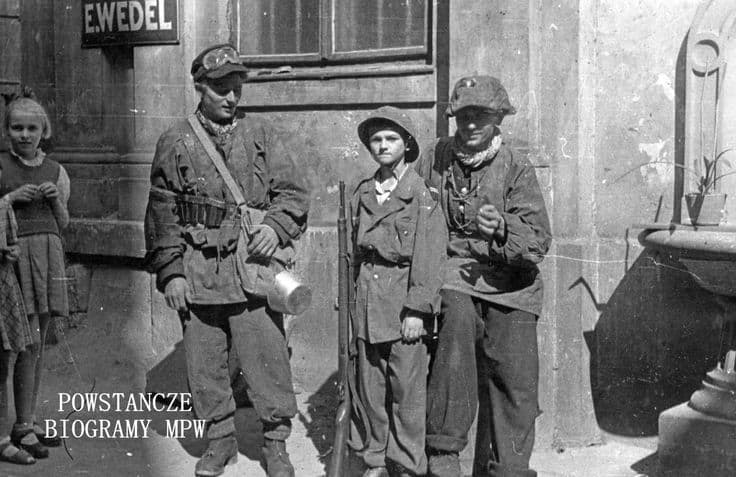 Photograph was taken just after the emergence of Battalion “MiotÅ‚a” (Sweeper) from the canals beneath “Old Town” during its movement around the “City Center.” These soldiers later joined a squadron known as “Czaty 49.” 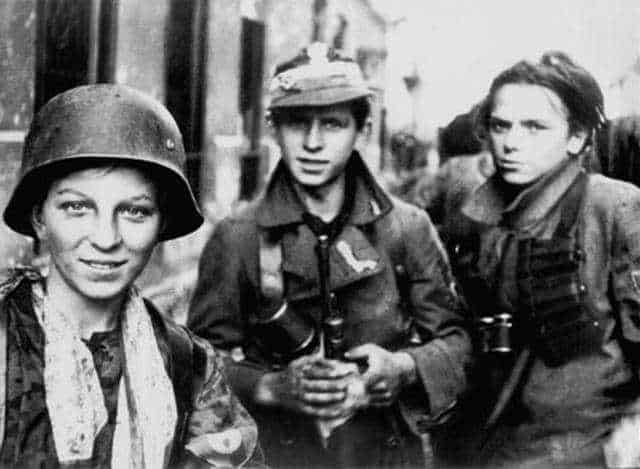