It is commonly held by many Americans that French people are rude and that they particularly dislike Americans. I have traveled to various regions of France on five or six occasions, and have always found the French to be warm, welcoming, and helpful. Others’ experiences may differ, and apparently do.

Regardless, if there is one region in France where the people most decidedly do not dislike Americans, it is Normandy. And that is because they, more than anyone else, remember with profound gratitude the events that started in the early morning hours 78 years ago Monday. Events that killed many of their ancestors and neighbors and laid waste to their land, but which ultimately led to the liberation and restoration of France as a free independent nation.

On the eve of the anniversary of D-Day, I want to commemorate the special relationship that exists between America and the people of Normandy, France. (I do understand and deeply admire the contributions made on D-Day by the British, Canadian, and other nations within the Allied forces, but this is written from an American perspective.)

Sainte-Mère-Église is a small town in Normandy that sits on a peninsula that juts northward into the English Channel. It was the first French town liberated by the Allies on June 6, 1944, as they came off the landing beaches a short distance to the east.

American Paratroopers were dropped in and around the town in the darkness a few hours before the landings started. Quite a few of them got hung up in trees and on buildings, and many of those who did were shot dead as sitting ducks by the occupying forces of the enemy.

One paratrooper was famously caught on the tower of the village church, where he played dead for several hours to avoid being shot. He survived to be rescued by the Allies when they took the town. The scene was depicted in The Longest Day, in 1962, and the town commemorates the event with a dummy paratrooper hanging off the tower. 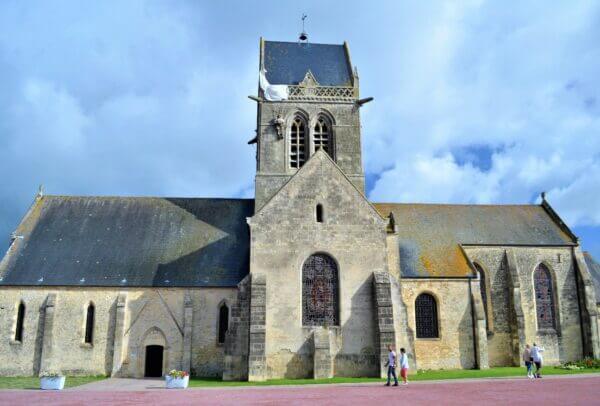 As you can see, the church is an older style with thick load-bearing walls and fairly small windows. I guess it would be called Norman style. Definitely not in the soaring Gothic style.

Inside, it’s fairly dark and simple. Nothing much special, except for two stained glass windows, which are unique and, I think, very special.

This is a reminder that there are places in Europe where Americans are remembered for the best of our history, and this is one… 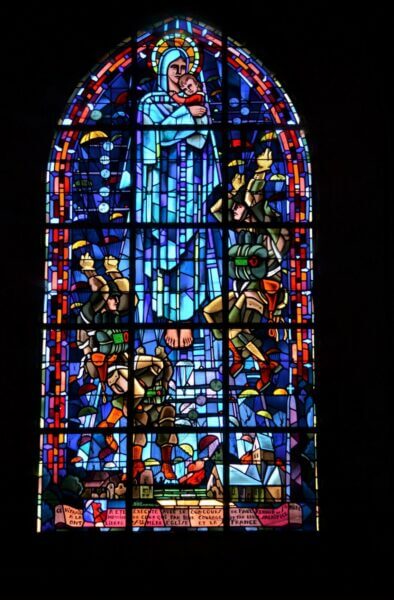 Caption:
“This stained glass was executed with the help of Paul Renaud of Ste. Mère
To the memory of those who through their courage and their sacrifice
Liberated St Mere Eglise and France.” 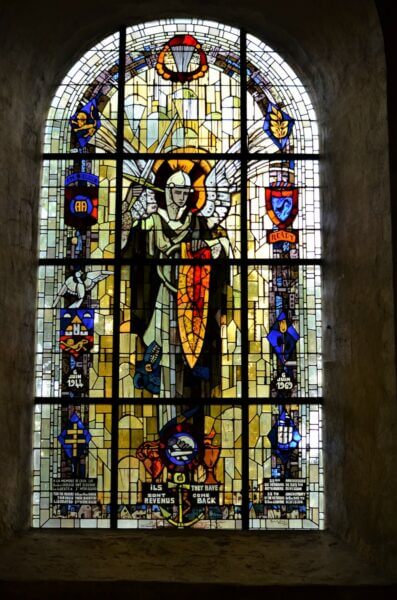 Captions, from left to right:
“To the memory of those who through their sacrifice liberated St Mere Eglise.”
“They have come back.”
“25th Anniversary of the Veterans of the 505th 82nd Airborne Division.”

Lest we forget the sacrifice they refer to, the American Military Cemetery, which sits on high ground with sweeping views of the landing beaches, reminds us with manicured grounds, meticulously maintained. 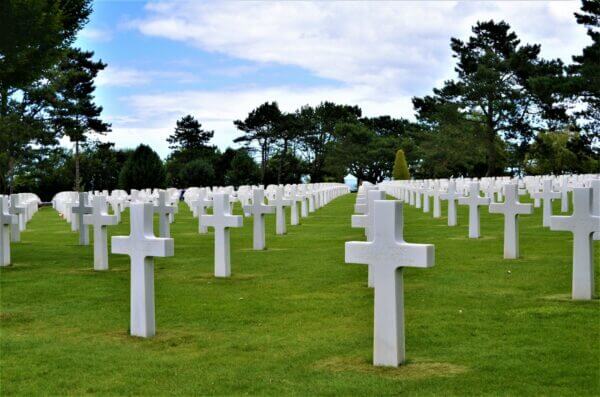 May the friendship between the people of Normandy and the people of America, forged in that greatest show of love, endure forever.