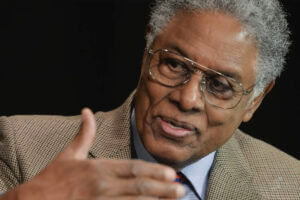 “What was peculiar about the West was not that it participated in the worldwide evil of slavery, but that it later abolished that evil, not only in Western societies but also in other societies subject to Western control or influence. This was possible only because the anti-slavery movement coincided with an era in which Western power and hegemony were at their zenith, so that it was essentially European imperialism which ended slavery. This idea might seem shocking, not because it does not fit the facts, but because it does not fit the prevailing vision of our time.”
― Thomas Sowell, Black Rednecks and White Liberals

The Iron Law of “Quote of the Day” Posts: when in doubt, go with Sowell. A few months back I read his 2005 book, Black Rednecks and White Liberals, and it was even more brilliant than the high level we’ve all come to expect. With seeming ease, Sowell dismantles the divisive racial narrative our media and political culture have peddled for decades. “Seeming ease,” because everything he writes is backed by years of research.

In 1833, the British Empire radically reconsidered the morality of slavery, an institution present throughout every previous era of human history. Once the Crown and Parliament deemed it an intolerable evil, they converted most of the world to their newly held view — often at the point of a bayonet. Only three decades later, the United States fully adopted this new morality, fighting its bloodiest war to remove slavery’s Southern holdouts.

According to modern anti-slavery group 50 for Freedom, there are more people in slavery today than at any other time in history. Our elites seem disinterested in freeing those 40 million suffering souls but eager to condemn America for not getting rid of the “peculiar institution” sooner. Instead of focusing on 1619, they could do far more good by looking at 2022 and abolishing the scourge of slavery everywhere.

This post is part of the Quote of the Day group writing project at Ricochet. The QOTD Signup Sheet for June is here and has plenty of open dates for new contributors. Share a quote and your commentary, or simply invite a discussion.