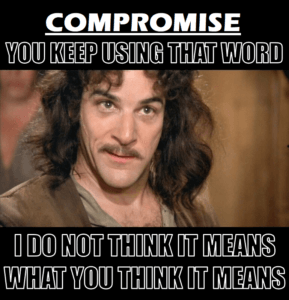 “We cannot negotiate with those who say, ‘What’s mine is mine, and what’s yours is negotiable.'”– John F. Kennedy, Address to the American People, July 25, 1961.

Once again the anti-gun people are starting to trot out the tired and hackneyed meme of “compromise” in the national gun conversation. Hmmmm… Yes. It is true. The awesome Mrs. hoowitts (and my sometimes wonderful children of 22 and 25, and future grandchildren, G-d willing) fall into this camp. They live this out: “What’s mine is mine; and what’s Dad’s is mine”. I can handle that. My choice.

But last I looked, I’m not married to FJB, DJT, BHO, GWB, NIAID, WHO, WTO, UN, FBI, AMA…does this bureaucratic list ever end? Or any other schmuck that covets a piece of my pie. 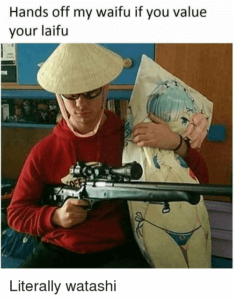 Obligated through some governmental paradigm that prioritizes policy based on the extremes at the cost of the 95th+ percentile? Well “You got another thing coming”.  Geez…a Judas Priest song helps makes my point. Not a shining moment.

In 2020 Biden ran on the term unity. Well, hot-diggity-dog! Who doesn’t want unity? Amiright? Well, let’s ask the Uyghurs. Or the Hutus. Or the Serbs. Or the Tibetans. Or Christians (anywhere other than the west). Or the European Jews in the ’30s-’40s (please, spare me Godwin’s Law…I’m  just getting it out of the way early).

There has been no good faith offer of compromise…of rationality…of commonsense from this Democrat party for more than a decade. What exactly is Oops. Sorry, the Left never compromises. Avoid that word. Let me restart. What exactly remains of the 2nd Amendment to compromise on?

One of the great analogies I came across was from a blog called “The LawDog Files“. I want to give him credit. Of course, I could just Biden my way along and say…

“I was accepted at the Naval Academy”
“I was arrested trying to see Nelson Mandela”
“I really enjoyed teaching as a professor at UPenn” (paid, yes; taught, no)
“I used to drive a tractor-trailer, so I know a little about driving big trucks”
“I remember spending time at the—you know, going to the—you know, the Tree of Life Synagogue”
“I went to Law School on a full academic scholarship. The only one in my class on a full academic scholarship”
“I graduated in the top half of my class (actually 76 out of 85 at Syracuse. I graduated with three degrees”

Here’s the analogy, or dare I say history lesson, as LawDog puts it:

I hear a lot about “compromise” from the gun-control camp … except, it’s not compromise. It is capitulation. Allow me to illustrate:

Let’s say I have this cake. It is a very nice cake, with “GUN RIGHTS” written across the top in lovely floral icing. Along you come and say, “Give me that cake.” I say, “No, it’s my cake!”

This leaves me with half of my cake and there I am, enjoying my cake when you walk back up and say, “Give me that cake.” I say — again: “No, it’s my cake!”

You say, “Let’s compromise.” What do I get out of this compromise? Why, I get to keep half of what’s left of the cake I already own. So, we compromise — let us call this one the Gun Control Act of 1968 — and this time I’m left holding what is now just a quarter of my cake.

And I’m sitting in the corner with my quarter piece of cake, and here you come again. You want my cake. Again.

This time you take several bites — we’ll call this compromise the Clinton Executive Orders — and I’m left with about a tenth of what has always been MY DAMN CAKE and you’ve got nine-tenths of it.

Let me restate that: I started out with MY CAKE and you have already ‘compromised‘ me out of ninety percent of MY CAKE …

After every one of these “compromises” — in which I lose rights and you lose NOTHING — I’m left holding crumbs of what was once a large and satisfying cake, and you’re standing there with most of MY CAKE, making anime eyes and whining about being “rational”,  and wondering “why we won’t compromise” as you try for the rest of my cake.

In 1933 I — or any other American — could buy a fully-automatic Thompson sub-machine gun, a 20mm anti-tank gun, or shorten the barrel of any gun I owned to any length I thought fit, silence any gun I owned, and a host of other things.

Come your “compromise” in 1934, and suddenly I can’t buy a sub-machine gun, a silencer, or a Short-Barreled Firearm without .Gov permission and paying a hefty tax. What the hell did y’all lose in this “compromise”?

In 1967 I, or any other American, could buy or sell firearms anywhere we felt like it, in any State we felt like, with no restrictions. We “compromised” in 1968, and suddenly I’ve got to have a Federal Firearms License to have a business involving firearms, and there’s whole bunch of rules limiting what, where and how I buy or sell guns.

In 1968, “sporting purpose” — a term found NOT ANY DAMNED WHERE IN THE CONSTITUTION, TO SAY NOTHING OF THE SECOND AMENDMENT — suddenly became a legal reason to prevent the importation of guns that had been freely imported in 1967.

The Lautenberg Act was a “compromise” which suddenly deprived Americans of a Constitutional Right for being accused or convicted of a misdemeanor — a bloody MISDEMEANOR! What did your side lose in this “compromise”?

I could go on and on, but the plain and simple truth of the matter is that a genuine “compromise” means that both sides give up something. My side of the discussion has been giving, giving, and giving yet more — and your side has been taking, taking, and now wants to take more.

I’ve got news for you: That is not “compromise”.

Joe Biden, or whatever Geppetto is behind this administration, tosses out: RATIONAL. COMMONSENSE. COMPROMISE. Please find me 1…Not 5. Not 3. But ONE example when Democrats have been rational, commonsense, or reasonable over the last decade:

Abortion went from “Safe, legal, and rare…to “Shout your abortions”

How did we go from, believe every woman, just four years ago in the Kavanaugh hearings to what’s a woman? Just ask the newest SC Justice Ketanji Brown Jackson. How did we go from there are women’s rights to there are no women? We don’t even know what a woman is. There are now more than 50 genders.

How did we go from reforming the police to defund the police? What did you think would happen?

How did we go from please be safe and flatten the curve, to universal lockdowns, including healthy individuals? Every child must be given a defective, experimental vaccine, even though children are not vulnerable to the virus. And the longer we investigate the vaccine, we’re realizing it has trouble.

There can be NO COMPROMISE on our current position, with this current Democratic party. Especially on the 2nd Amendment. No quarter shall we give. The last decade+ has proven there is nothing rational….nothing reasonable…nothing commonsense about today’s Democrats.

ANY GOPe that is willing to reach across this aisle needs to be primaried and disposed of. Yes, I’m speaking politically (but I do know I guy ;-).