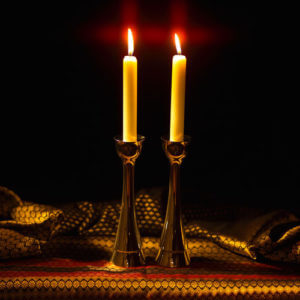 When I was attending Cal State Long Beach, I remember one lunchtime when I was approached in the cafeteria by a young man. I don’t remember exactly what he asked me, but I know it had to do with Jesus, and I was immediately put off. I had spent most of my growing up years feeling like an outsider (as a Jew) and a heretic (for not accepting Jesus), and I brusquely rejected his inquiry. He politely walked away, but his unsolicited inquiry has stayed with me.

But my perspective towards Christians in general and Evangelicals specifically has changed dramatically. Due to the communities with which I socialize and my limited but sincere practice of Judaism, coupled with my curiosity about religions, I welcome input from my Christian friends and have found them to be very kind (except for one Ricochetee who believed that the Jewish religion was no longer relevant). So, I thought I might benefit from learning the nature of the relationship between Jews and Evangelicals, the complexity and diversity of those relationships, and how we might all benefit from knowing each other better.

By beginning with the Jews on the political Left, we can see the most current reasons for Jews rejecting and distrusting Christians:

After the Marxist claims about the proletariat proved false and capitalism was vindicated as the best way to achieve economic affluence, leftists had to stop pretending that they could accomplish much with state-owned factories and national economic plans. As a result, the oppressed replaced the proletariat as the Left’s object of affection. The enemy became, not capitalists, but successful nations.

Attributing Marxist doctrine to the cause of the Palestinians was a premise I hadn’t anticipated. But considering the prevalence of Marxist ideas in this country, I guess I shouldn’t be surprised.

There is also another distorted set of beliefs that causes Leftist Jews to fear Evangelical Christians:

Christian Smith, a sociology professor at the University of North Carolina, analyzed four surveys of self-identified evangelicals and found that, while they do think that America was founded as a Christian nation and fear that the country has lost its moral bearings, these views are almost exactly the same as those held by non-evangelical Americans. Evangelicals, like other Americans, oppose having public schools teach Christian values, oppose having public school teachers lead students in vocal prayers, and oppose a constitutional amendment declaring the country a Christian nation. Evangelicals deny that there is one correct Christian view on most political issues, deny that Jews must answer for allegedly killing Christ, deny that laws protecting free speech go too far, and reject the idea that whites should be able to keep blacks out of their neighborhoods. They overwhelmingly agree that Jews and Christians share the same values and can live together in harmony. Evangelicals strongly oppose abortion and gay marriage, but in almost every other respect are like other Americans.

Yet Jews on the Left persist in holding these flawed views. When it comes to helping secure Israel’s survival, the tiny Jewish minority in America should not reject the help offered by a group that is ten times larger and whose views on the central propositions of a democratic society are much like everybody else’s.

In spite of the facts, politically Leftist Jews are highly critical of the Evangelical community:

Evangelical Christians have a high opinion not just of the Jewish state but of Jews as people. That Jewish voters are overwhelmingly liberal doesn’t seem to bother evangelicals, despite their own conservative politics. Yet Jews don’t return the favor: in one Pew survey, 42 percent of Jewish respondents expressed hostility to evangelicals and fundamentalists. As two scholars from Baruch College have shown, a much smaller fraction—about 16 percent—of the American public has similarly antagonistic feelings toward Christian fundamentalists.

There are also tensions over the belief in the end times, with a wide range of belief among the Evangelical Christians; Jews, of course, are waiting for the Messiah. A little humor goes a long way to bridging the gap:

As the late founder of the International Fellowship of Christians and Jews, Rabbi Yechiel Eckstein said in a conference led by Israel365 Media in 2015, ‘When the Mashiach comes, we can ask him if this is his first time here or second. Till then, let’s focus on our shared values and opportunities together’.

I expect most Leftist Jews are not amused.

I have no problem with your discovering Jesus and embracing Jesus and putting your faith in Jesus – I actually support that. In fact, there’s a story about the Rabbi Israel Baal Shem Tov, founder of Chassidism, who wouldn’t ride with a wagon driver who didn’t wear a cross on his chest. He preferred to roam through the deserted tundra with a man who at least feared something—never mind the theological nuances.

But why can’t you keep it to yourselves? Why must you insist that I, too, reject my grandfather’s Torah, stop praying the way my family has done since the minus fifteen hundreds, and accept your Jesus, and in my heart, no less?

All religions are entitled to state their purpose and beliefs freely in this country. Unless a person is trapped in a situation where they are forced to listen to these ideas, they should appreciate that this country welcomes religious expression.

The last trend that I wanted to share is something called Replacement Theology:

Younger Evangelical Christians are increasingly distancing from Israel and are less likely to see any theological significance in the Jewish people. However, for many, this may not be the most worrisome development in and of itself. What is more concerning is that it is likely correlated with the fact that more young people are adopting Replacement Theology—believing that upon the birth of Jesus, the Jewish people ceased its role as the chosen people and the Church subsequently replaced them. Many of them are Millennials (34%) even though they only represent 22% of all Evangelical Christians.

These Millennials are today’s young leaders in the United States—in churches, business and government. This trend is unsettling because history has shown that Replacement Theology has produced both antisemitic and anti-Israel sentiments. Especially in European history, those holding positions of Replacement Theology have viewed God as being finished with the Jewish people and Jews as disloyal by being “responsible” for the crucifixion of Jesus. Historically, this has been the source of many antisemitic tropes.

I had not heard about this theology before, and wondered if others had. I’m not here to debate its validity, but only say that it does raise concerns for me.

Finally, this statement summed up my own views toward Evangelical Christians and Christians in general:

Well, our interests with the Evangelical community are aligned.  Evangelical supporters have been Israel’s best friends. They have supported the Israeli government, have invested funds in our startup nation and donated over 1.5 billion dollars to organizations we work with. Most importantly, they believe in the same Bible Passage in Genesis that we do. Do we really want to throw out the baby with the bathwater just because we don’t agree with their eschatology?

My Christian friends, Evangelical or otherwise, are a blessing in my life. I’m so grateful for your love and support, and welcome your input to this post.