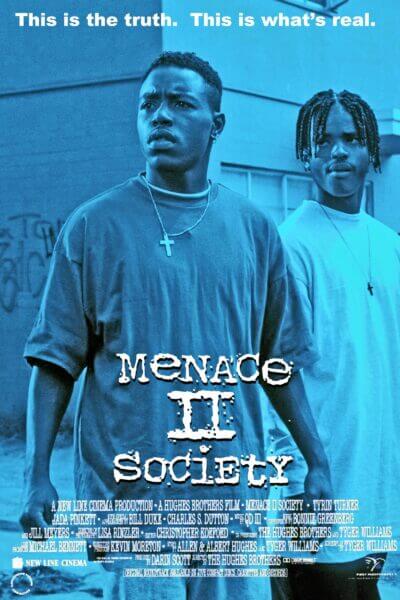 “Hey, you ain’t gotta be creepin’,” O-Dog (Larenz Tate) tells the Asian shopkeeper at the convenience store. “Man, always think we gonna steal something,” he says to his friend Caine (Tyrin Turner). A minute later a remark from the cashier angers O-Dog so much he shoots the cashier and the shopkeeper.

After that opening scene, we get narration from Caine telling us about his childhood. His father (Samuel L. Jackson) was a pusher with a short fuse. During a poker game, he shoots another player. Little Caine looms in the background of the frame, wearing his pajamas. Menace II Society (1993) is filled with senseless violence. When the violence is not petty and impulsive, it’s just a link in an endless chain of retaliations. Violence is so mundane an aspect of these people’s lives, most don’t notice a difference between O-Dog and his obvious psychopathy and Caine who may well have been an upright citizen had he grown up in a different environment than the projects of LA.

Caine graduates high school, barely. His grandfather calls this the proudest he’s ever been. His grandfather raised him since his father and mother died in a drug deal gone wrong and by an overdose respectively. One of Caine’s friends, Ronnie (Jada Pinkett), is a single mother and one of the few people he knows trying to lead an honest life. Later she gets a job in Atlanta and offers Caine the chance to come with her and leave behind the gang life. It’s hard to say if his reluctance to join her stems from him not knowing any other path than the one he’s on, or if he can’t resist the allure of drugs, casual sex, and money.

We see in Caine glimpses of humanity and a desire for a better future. He tries to stop O-Dog from showing the surveillance tape of the convenience store shooting to their friends. He drops off wads of money in Ronnie’s dresser drawers, though she does tell him she doesn’t want his blood money. He listens intently as a friend’s father (Charles S. Dutton) gives him a lecture on turning his life around.

Menace II Society has a rather conservative viewpoint. Urban culture is depicted as destructive, degrading, unfulfilling. Of the few people who try to steer Caine away from gangbanging, two of them are not only religious but use religion to justify their arguments. Fatherlessness is near-universal. Pernell, a sort of mentor to Caine and father of Ronnie’s son, is in prison. From behind plexiglass, Pernell tells Caine to look after his son and “teach him better than I taught you.” Irresponsibility is rampant. When a girl calls Caine to tell him she’s pregnant, he accuses her of sleeping around. “So you’re man enough to take a life, but not man enough to take care of one?” she says, tears in her eyes.

That’s not to say the movie is a Republican dream. One of the religious people trying to set Caine straight is his friend Sharif, a convert to the Nation of Islam. In that aforementioned lecture, Sharif’s father tells him, “Being a black man in America isn’t easy. The hunt is on. And you’re the prey.” The police are shown as thuggish, on the prowl not on patrol. At one point, they brutalize Caine and Sharif, then drop them off in the territory of a Hispanic gang under the assumption they will beat them further. 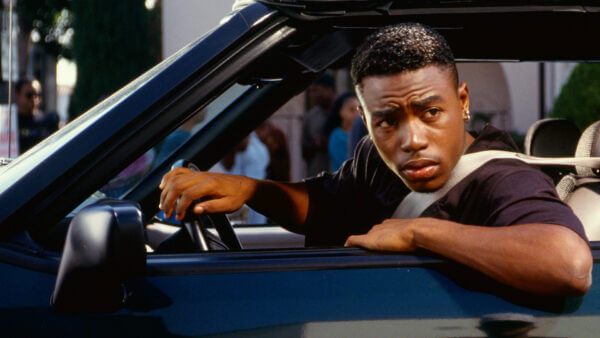 The movie was directed by twin brothers, Allen and Albert Hughes, who were only 21 at the time. Some of the acting is spotty. Otherwise, the movie does not come off as a rookie production. This is strong, confident filmmaking. In one scene Caine and O-Dog run from the cops in a parking garage. They duck behind a car when a police dog attacks them, and the camera zooms into the cage-like grille of the car while we hear the boys’ screams. There’s a long take traveling through a house party that deserves more recognition.

The final scene has slo-mo, voiceover, montage, and a heartbeat pounding over the soundtrack. Unfortunate they felt the need to ornament the scene this way. The event is tragic enough by itself. It’s a logical fate for Caine; it’s a logical fate for thousands of young men in this country.