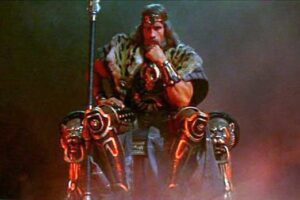 “If I had it to do over again, I’d study philosophy and play drums in a rock band.”

That phrase, rolled so trippingly off my tongue over several decades, has been doing so with greater frequency in recent years while serving as a sort of mental ejection button. Feeling stressed at the entirely preventable catastrophes unfolding across the country? Me too. Working a soul-sucking job that you positively dread? What a coincidence!  Feeling bogged down in, …well, you get the idea.

That’s when the mind takes a vacation to distant places and circumstances, some of which are attainable and some of which are the stuff of pipe dreams. Like settling down to play drums in a thunderous rock band and studying philosophy, for example. After all, ear-splitting iconoclasm mixed with cerebral contemplation might be an entertaining and fun mix, but there is some real cognitive dissonance there, no?

For instance, were I to put my drumsticks down for a while and pick up Plato’s Republic or Aristotle’s Nicomachean Ethics, I’d run cranium-first into some troubling discourses on the power of the music I so dearly love. For his part, Plato writes that, “…more than anything else rhythm and harmony find their way into the inmost soul and take strongest hold upon it.” As philosopher Mary B. Schoen-Nazzaro described Plato’s observation:

In reaching out and touching the soul, music should move the soul toward goodness, It can happen, however, that the soul is badly trained and deformed by music. In these instances musical training is carried to a wrong end: music must penetrate the soul, but it must not push it toward vice. One use of music suggested by Plato, then, is to mold the soul along good lines, that is, dispose it toward moral virtue.

Well if that doesn’t just lay an egg on all the fun of playing drums in a rock band and studying philosophy I don’t know what does. Rock music embodies and literally screams out the primal elements of the human condition. Then again, as long as we’re talking about eggs, another philosopher once observed, “The chicken probably came before the egg because it is hard to imagine God wanting to sit on an egg.”

You do see what I did there, right? Because when confronted with an apparent inconsistency in a cherished dream, it’s easier to go full Groucho Marx and enjoy a laugh. Such a laugh would be lighter on the conscience than tracking, say, the parallel trajectories of both music and civil society against the true north of moral virtue. Because then we would go from Bach writing “J. J.” at the beginning of his compositions (for Jesu Juva, or Jesus Help) and S. D. G. at the end (for Soli Deo Gloria, or to God Alone the Glory), all the way over to the reptilian lyrics like those at the beginning of Cardi B’s “song,” the title of which must be reduced to the letters W.A.P., which begin not with a prayer to our Lord, but with the words:

Whores in this house

There’s some whores in this house

There’s some whores in this house

There’s some whores in this house (hol’ up)

In her defense, the beginning of Cardi B’s wretched nonsense is the tamest part of that entire wreck of a song, which unsurprisingly won the BET Hip Hop Award for Best Song of the Year in 2020.

Under the circumstances, we are entitled to ask whether there is a cause and effect relationship between the caliber of music as it existed when Bach presented his six Brandenburg Concertos in 1721 to the caliber of Cardi B.’s pornographic idiocy some 299 years later — and the state of civil society from Americans who fought the British Crown to secure your freedoms to today’s marauders who fill the evening news with assaults, homicide, mass theft, arson, and a continuing attack on order and decency?  To the extent that Plato was correct in deducing that music indeed touches and moves the soul, then a nexus between the moral degradation of music and the degradation of society as a whole is well-nigh inescapable. 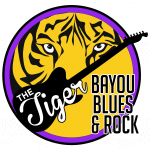 “Okay then, Mr. High-Minded Radio Dude, what say you about the conclusions you’re drawing here, and your little muse over there at The Tiger, Bayou Blues & Rock, where listeners get whiplash while going from Louis Armstrong’s Do You Know What it Means to Miss New Orleans to Ted Nugent’s Thighraceous or Ozzy Osbourne’s Flying High Again and Hellraiser? Would Plato approve?”

I can’t be positive, but I rather doubt that Plato would approve of a great deal of the music I play on my radio station. Even the jazz, blues, and Mardi Gras selections have a rhythm that he might find objectionable on the grounds that they’re too risqué or ribald. And God knows he would think the earthy beat and thunderous, bone-crunching metal of my rock repertoire positively beastly. So what explains the attraction and the reason I indulge in that kind of music? 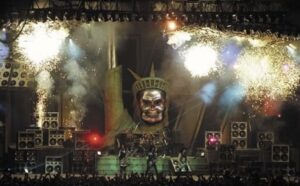 “I was going to ask…” I think it’s the rebellious nature, the sheer audacity of power chords that will crack your ribs along with the unbridled strength and rebellious stance that heavy metal personifies, which in turn reflect aspects of my own temperament.  It’s the kind of attitude that declares independence and wages war on George III, or puts a bullet in the brain of Osama bin Laden without hesitation, or extends a middle finger to anyone who presumes to order me about as if I had been born to be micromanaged by bureaucrats and led by the nose.  I swear sometimes that my family attended my retirement from active duty military to make sure that it wasn’t actually a court-martial because of my notorious rebellious streak (I had managed, after all, to torque off a fair number of general officers).

Tolstoy wrote, “Music is the shorthand of emotion.” Exactly so, and I believe there is something uniquely and authentically American about a genre whose chords and power literally roar individual freedom. That’s one reason why it was considered dangerous years ago, and precisely why it is embraced by those who resist today’s ideological tyrants.

“Okay, Radio Dude, if you’re finished with your little 4th of July cadenza, can you tell me why you should be free to play your wild music and Cardi B. shouldn’t be free to play hers?” I’m not saying that, nor would I ever say that. Ms. B. should be free to make whatever music or sounds she wants to make and market them, consistent with appropriate warning labels in the case of sexually explicit content. It’s a free country, which is something Plato might disapprove of as well.

“So your station plays music as pure as John Phillip Sousa’s Stars and Stripes Forever, eh?”  Hardly. My station celebrates my home state of Louisiana, which had an early population composed in significant part of prostitutes and former prisoners from Paris, after all. Add in the Acadians, who were exiled from their homes in French Canada, the Spanish influence, Germans, the English, and the incredible influence of African Americans and you’ve got quite a gumbo of sounds and experiences. I rather like that and I enjoy playing their music.

On that last point, we should remember composer Paul Whiteman’s words that, “Jazz came to America 300 years ago in chains.”  In fact, any authentically and uniquely American music has roots that can be traced back to the African American influence and experience. It accounts for jazz, certainly for blues, and is the very foundation of the rock music I enjoy so much.

So while it’s not John Phillip Sousa, it is authentically American, complete with rough edges and the occasional impulse of the renegade — much like the station’s owner, actually, who would still be content to play drums in a rock band and while away the hours studying philosophy.