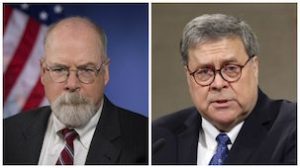 Count me among the many conservatives conned by Attorney General William Barr. I praised and promoted his public performance more than once. As evidence drips out too late, or conveniently delayed, it appears Barr was an old fool, a duplicitous knave, or both. We see this in the Michael Sussman trial and in 2000 Mules showing the clear smartphone geotracking evidence of illegal ballot harvesting in the critical swing states.

It is perplexing that no one within the FBI has been held accountable for the many lies told at the March 6 meeting. This fact is all the more perplexing as it was Durham who originally turned over the March 6 notes to Sussmann’s defense team.

Former Attorney General William Barr had earlier turned down the opportunity to charge McCabe with lying during an internal FBI investigation of a leak related to the Hillary Clinton email investigation. McCabe had authorized the leak but lied about it. McCabe later apologized for lying to agents who were investigating the leak.

While Barr claimed it was a judgment call not to prosecute McCabe, his lies must now properly be seen in light of the FBI’s and his own pattern of lies, as documented in the March 6 notes. While the notes were only publicly released last week, they have been available to Barr, Durham and the DOJ for much longer. Yet no action was taken.

Crucially, public release of the notes came after the five-year statute of limitations had lapsed in March of this year. The question is why the DOJ — and Durham in particular — gave the FBI a free pass. The uncomfortable answer may be that, as has been suspected for a while, Durham’s authority is effectively limited to private actors such as Sussmann and Danchenko and does not extend to public officials such as McCabe and Strzok.

Credit to Ricochet member @unsk for making the Knave Barr case back in December 2020, here and here. For a good argument that Barr is an old fool, rather than a knave, see the review by @rodin of Barr’s memoir.