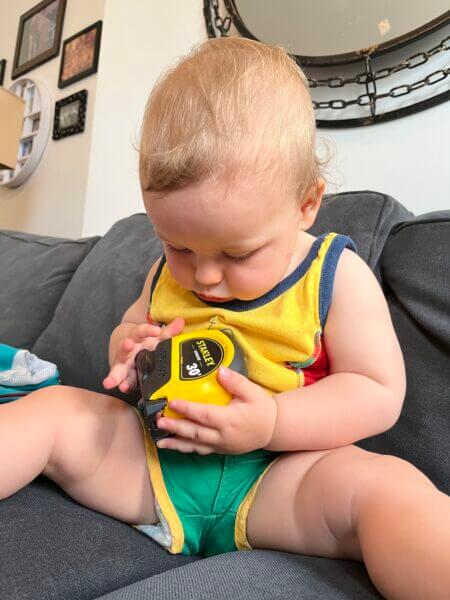 When I arrived at my brother’s apartment in New York, on my way to the Ricochet Meetup, we exchanged hellos, he asked how I was.”Exhausted,” I said. I hadn’t slept the night before because I rarely get sleep if I have to wake up early for a flight. His response, “Welcome to the club.” He had been kept up the night before by his son, who’s a mere 11 months old. I gather being kept up by his 11-month-old boy is common.

I raced out for the event a few moments later and was thankfully rejuvenated by the stimulant of enjoyable company.

But, alas, I wasn’t able to see the baby when I returned because apparently babies don’t stay up til 11:30 – not even to visit with uncles. And double-alas, I couldn’t sleep that night either! Baby was innocent, Sandman just didn’t show. By my count, it was something like a 62-hour Zzzz-less weekend.

On Sunday, I was watching the baby. My brother and his girlfriend were running a tent at a food festival called Smorgasberg. (I recommend if you find yourself in the city on Sunday afternoon.) Momma is a chef, Pops ran the register, and my nephew’s maternal grandmother – “Mermaid,” she’s called – was on the line, she’s quite a cook herself.  My job was to entertain the boy.

We spent most of the afternoon enjoying Brooklyn’s Prospect Park, where the event was being held, before heading back to the apartment. He wouldn’t cooperate with my plans for a long nap, so we stayed up and watched his favorite show, Classical Baby; surely the best series HBO has, or will likely ever, produce. For a taste, I’ll attach the opening sequence:

The show is splendid. So much so that even intense weariness didn’t subtract from it. My brother was wrong to welcome me to the club, but I got a sense of what membership is like. Complicated as it is, I can see the appeal.

Wikipedia tells me Classical Baby originally aired in 2005 and then returned to release a few other episodes in 2017. It includes famous segments of compositions by Tchaikovsky, Bach, Mozart, Chopin, Debussy; American songbook favorites by Gershwin, Irving Berlin, Count Basie, Duke Ellington; along with poetry segments using the work of Shakespeare, Frost, Langston Hughes, and William Carlos Williams; and is beautifully illustrated with motive imitations of the likes of Clement Hurd, H.A. Rey, P.D. Eastman, and Maurice Sendak, and in at least one portion of the show, bring the best of Van Gogh, Degas, Monet and Mondrain to life — to movement to be more precise. (Consider this a thorough surface scratch.) 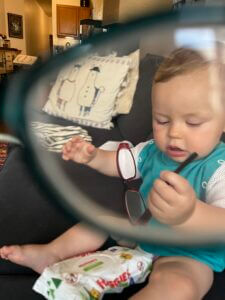 If you, or anyone you know, has little ones, trust me when I say it’s worth attention! I’ve always found most children’s programming offensive (I swear I distrusted Disney before it was cool!) so to discover something that might grant young parents a well-deserved break, without the suspicion that I’m looking at the work of creeps offering children candy, is a lovely thing. I hope it refines the tastes of now-usual unorthodox parents like the ones who left me to look after their infant.

Here’s the part that interests me. The poetry segments, delightfully interspersed with precocious children (aged roughly from five to eight) attempting to describe poetic mysteries, are narrated by a few of Hollywood’s finest. Susan Sarandon, John Lithgow, Gwyneth Paltrow, Andy Garcia, and Jeffery Wright; Paul McCartney is another living star whose “Sleeping Willow” appears in the show. That’s fine, each has a nice voice and I’m glad they’ve participated in this for the same reason I’m glad they were a part of the productions that made them famous in the first place. But I don’t exactly wonder what their responses might be if an American journalist gave pause to their participation in this passion project they’d signed on for, and asked their opinions on the upcoming Dobbs v. Jackson decision.

I certainly wouldn’t put money on them arguing that new life is a precious thing. That  offense would require a modicum of courage and conviction. I know they know it, clearly they do. But they won’t say it.

There’s a slew of rhetorical questions I could ask. I’ll spare you the bulk of them, except one set: Why should the baby be classical? Why not Rock-n-Roll Baby? Or to be more inclusive, why not Jazz Baby, Funk Baby, or Hip Hop Baby? I see some value in all of the genres above, but it’s only the one HBO Max settled on that ought to have made the cut. I’d pay top dollar to see the supposed winners of the cosmological lottery pay their due to that which is more than precious, but sacred.

I’ll leave you with one clip that stood out to me: A Cuban lullaby, “Drume Negrita,” performed by Bola de Nieve.

As far as the moral debate of abortion goes, I’ve found it a curious thing that there’s a bipartisan consensus that excludes the fathers as people whose rights are worth consideration. I guess that’s one more Q worth thinking over… I’m probably not in a position to do it, but I suppose it’s my brother and his precious little son who ought to be welcomed to the club.