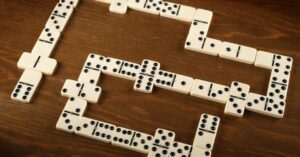 I was recently re-introduced to the game of dominoes. (Actually, there is no one game, as those who are fans know well.) But all of the games I have been introduced to share the same feature: you match one side and then send the “train” off in a different direction numerically or physically. And it is this feature that makes it fascinating (and frustrating when a plan is blocked) because of uncertainty and unanticipated opportunity.

This is what the best posts and commentary share in common: being a jumping-off point for thought and elaboration conducted cooperatively from many minds. Don’t be frustrated by the blocking moves by certain commenters. Exploit openings elsewhere in the post or commentary to pursue your line of thought. Leave the antagonists behind to stew in their own juices if they must. Just post a 😀 and move on.

If you don’t see a relevant opening for your thoughts just create your own post. And if no one plays off your thought, that’s OK. Just draw again and put another post down. Eventually, someone will engage and the “train” will begin.