I like Dr. Vinay Prasad, and his January article “We Need to Talk about the Vaccines” is very good. Among other important claims in the article: 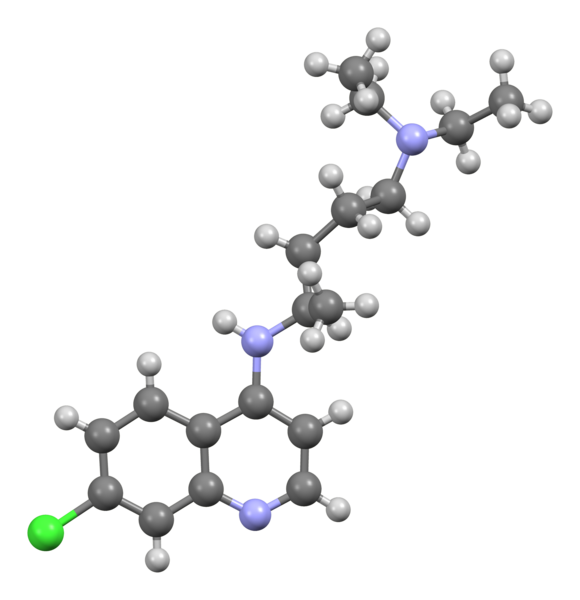 But should I?  On chloroquine (molecular structure left; nice picture from Ben Mills), Dr. Prasad cites an article in Nature: “Mortality Outcomes with Hydroxychloroquine and Chloroquine in COVID-19 from an International Collaborative Meta-analysis of Randomized Trials.”

Before talking about this article, let me ask you a question:

Did Dr. Zelenko, Dr. Risch, Dr. McCullough, or any other advocate of chloroquine for Covid not promote chloroquine as a treatment for very early on in the disease–i.e., as soon as symptoms appear, pre-hospitalization?

I’m pretty sure the answer to that is “No.”  Please let me know if I’m missing something.

Unless I really am missing something there, that means that if you want to argue that these guys are wrong, it’s not enough to just cite some study that says that some variation of a chloroquine-for-Covid treatment didn’t work.  You have to cite a study that looks at chloroquine for Covid as an early treatment, probably with zinc, and preferably with an antibiotic as well!

Cite some other study, and from what I can tell all you’re doing is making a straw man fallacy–a fallacy of arguing against a position your opponent never actually takes.  In this case, the fallacy would be something like, “Studies show that chloroquine taken in ways not prescribed by Zelenko/McCullough/Risch don’t help with Covid, and therefore Zelenko/McCullough/Risch are wrong.”

I hesitate to say what the Sultan of Agrabah said, but Dr. Prasad seems to me as earnest and honest as any Covid commentator in the business, much more ethical than most of them, and almost infinitely more knowledgeable than I am on medical stuff.

I don’t want to accuse him of any fallacy.  But maybe he made a mistake.  Maybe he fell for a fallacy.  Let’s find out.  Back to the Nature article we go!

The Nature article is a meta-study.  The abstract explains that it relies on 28 studies of chloroquine for Covid.  We don’t know if their argument is any good until we check to see whether those studies were looking at the same treatment, or at least at something sufficiently similar.

Conveniently, the URL above for the Nature article gives us what we need in a nice Excel document that tells us how to find the studies.  A Pakistani study gets three rows in the spreadsheet, and one from North Carolina gets two rows–for a total of twenty-nine rows.  Once you subtract those, you get only 26 studies.  I’m not following how they got the 28 studies mentioned in the abstract. But whatever.

I’ve run a rudimentary logic check on this information using a new spreadsheet.  I’ve kept the first column from the original spreadsheet and combined the extra rows for the aforementioned studies from Pakistan and North Carolina.  I relabeled the first column (Column A) “Searchable tag” because it contains things like “NCT04353336″ and “NCT04308668,” which is how you can locate information on the studies through search engines.

I’ve searched all 26 studies, and I’ve added some columns to keep track of whether these studies are actually checking up on the chloroquine treatment actually recommended by chloroquine advocates.  Column B: Are they using chloroquine early on–at the first sign of symptoms, pre-hospitalization?  Column C: Are they using zinc?  Column D: Are they using an antibiotic?  (Occasionally, by the way, a study will give patients chloroquine plus the then-reigning “standard of care.”  I can’t promise that that never included zinc or an antibiotic, so I tried to at least include this information parenthetically when it came up.)  There’s also a Column E for more information.

In order for the meta-study to give us a useful argument against the position of Risch, Zelenko, McCullough, et al, we should have a whole lot of boxes with “Yes” in them.  We should have several rows that have at least two boxes with a “Yes,” and preferably three.

Guess how many rows have at least 2 boxes with a “Yes.”

The only mention of zinc I even noticed was the study that gave zinc only to the control group.

And that means that these studies, and the Nature article based on them, are not good evidence against advocates of chloroquine for Covid like Drs. McCullough, Zelenko, and Risch.  The Nature article’s conclusion is:

In this work, we find that treatment with HCQ is associated with increased mortality in COVID-19 patients, and there is no benefit of CQ.

It looks like they reached that conclusion by way of a straw-man fallacy.

So I can disagree with Dr. Prasad.  On chloroquine, anyway.  (Don’t ask me about ivermectin.  I’m already spending too much time trying to think through chloroquine!)

Might chloroquine actually be useless against Covid?  Or even harmful?  Might it be useful in some treatments and useless in others? Might it be harmful in some combinations, or harmful for a late-stage infection?  Sure–what the heck do I know?

But, like certain a Greek philosopher who never goes out of style, I know what I don’t know, and I don’t know that the chloroquine treatment recommended by its advocates is useless.  That hasn’t been shown by this study, the studies behind it, or anything else I’ve come across (and been able to understand).

If you go to HCQMeta.com, you can look at a nice overview of the results from a much bigger number of studies.  You can even look over the areas of the page where they look at only the controlled studies that consider chloroquine as an early treatment.  Chloroquine looks pretty good there.

You can also look at the areas of the page where they look at the late-treatment studies.  Chloroquine doesn’t look so good there.

You can also look at the section where they include only the better trials–i.e., the randomized controlled ones.  It turns out chloroquine looks very good on 8 randomized controlled studies of its early use.  It looks bad on just three of them. (One of those three is a “Small early terminated” study with only 62 total people and some other issues.  Another one did not involve zinc or an antibiotic, did involve other drugs, and still managed to find that “High-dose Oseltamivir and Hydroxychloroquine were superior to voluntary quarantine without antiviral agent in terms of viral clearance in mild Covid -19” and that “Favipiravir plus Darunavir-Ritonavir plus Hydroxychloroquine were superior to other antiviral agent combinations in terms viral clearance and death in moderate to severe Covid -19.”  And a third, involving an antibiotic but no zinc, doesn’t look great for chloroquine. However, it only involves 42 patients taking chloroquine, and the worst thing that happened was that a grand total of 1 of them went to hospital compared to 0 in the control group; we need more data than that.)

In short, I want to disagree with Dr. Prasad on the uselessness of chloroquine, and apparently I get what I want.

And you know what else I want? I want those who tout the official positions to do so without using any logical fallacies.