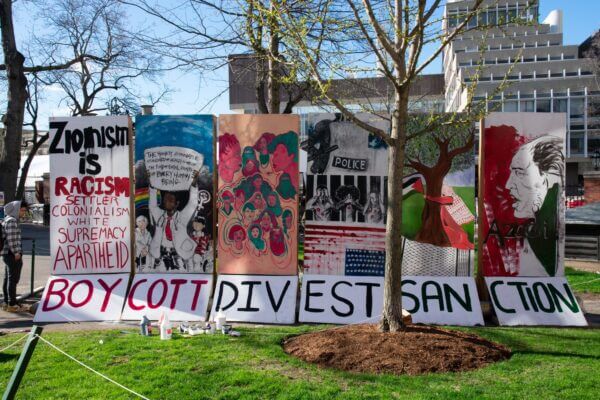 When I saw the latest Harvard Crimson editorial condemning Israel by joining Boycott-Divest-Sanction, I couldn’t decide if I was mainly disgusted or dismayed. I think I’d have to say I experienced both of these emotions in turn. The action by the Harvard Crimson editorial staff is one more example of a university trying to show that it has become enlightened, while they are only demonstrating their virtue signaling. It’s clear that they have caved into the pressures from a campus organization.

I was fascinated to discover that 20 years ago, the student newspaper had actually rejected the BDS movement:

But any comparison between today’s Israel and Apartheid-era South Africa is so fundamentally flawed as to be offensive. The Israeli legal code does not discriminate against Arab Israelis the way that the Apartheid laws discriminated against black South Africans. In Israel, the law provides for the equal treatment of all of its citizens, both Jewish and Arab. In South Africa, however, blacks were the victims of laws that controlled their day-to-day lives, dictating where they could live, work and travel. And in South Africa, the government slaughtered blacks when they protested the government’s policies; Israel has done nothing even approaching that level of repression—to either Israeli Arabs or to Palestinians in the West Bank.

So what has changed substantially in Israel since 2002?

One person who condemned the Crimson’s stand was Roz Rothstein, co-founder and CEO StandWithUs, an education organization that fights anti-Semitism and supports Israel:

‘The Crimson did no justice to Israelis or Palestinians, and undermined its own credibility as a newspaper more than anything. By omitting all context regarding terrorism against Israel, from knife attacks to launching thousands of rockets, and Palestinian leaders rejecting every major peace proposal since 1937, the editorial board displayed ignorance at best and journalistic malpractice at worst. Its lack of concern for Israeli lives and promotion of a campaign to end Israel’s existence will certainly do harm to many Jewish students on campus,’ Rothstein said.

Then again, we could argue that their position on BDS is no worse than any other major newspaper. Surprisingly, the Biden Administration rejects the BDS movement. It must have been an oversight on their part.

But the atmosphere has changed at Harvard. The students there who support the Palestinians and criticize Israel have become more vocal and aggressive in their activities. Even the Crimson’s editors admitted that they felt pressured into revisiting their original assessment:

When oppression strikes anywhere in the world, resistance movements reverberate globally. The desire for rightful justice spreads, like wildfire, moving us to act, to speak, to write, and right our past wrongs.

Over the past year, the Harvard College Palestine Solidarity has strived to do just that. Amid escalating tensions between Israel and Palestine, PSC has hosted informational programming, organized weekly demonstrations of support through ‘Keffiyeh Thursdays,’ and even installed a colorful, multi-panel ‘Wall of Resistance” in favor of Palestinian freedom and sovereignty.

In at least one regard, PSC’s spirited activism has proven successful: It has forced our campus — and our editorial board — to once again wrestle with what both Human Rights Watch and Amnesty International uman Righhave called Israel’s ‘crimes against humanity’ in the region.

So the Crimson editors finally gave in to the continual attacks conducted by the Palestinian supporters, which they probably believe will make their lives much easier. Still, Natalie Kahn called out the Crimson Editorial staff at their selective use of the “facts” of the controversy:

Perhaps the Editorial Board would agree, since its piece fails to condemn Palestinian terrorism or the charter of Hamas, the governing regime elected to power in Gaza in 2006 — that explicitly calls for the annihilation of the Jewish people. On top of that, a 2019 New York Times article reported that the BDS National Committee lists among its members the Council of National and Islamic Forces in Palestine, which in turn includes both Hamas and Palestinian Islamic Jihad.

How many members of the Editorial Board can tell me the story of Israel’s history — numerous peace treaties the Palestinians have rejected, human shields used by Hamas–to gaslight Israel, and thousands of Israeli civilians murdered by terrorists? What about the millions of dollars used by the Palestinian Authority in the West Bank for the, rewarding terrorists for crimes against Israelis?

Those Jewish students at Harvard, whether on the Crimson editorial staff or not, may one day realize how they have betrayed journalistic standards, their Jewish heritage, and the truth, and reverse course once again.

I wonder how the Harvard College Palestine Solidarity organization will respond then?