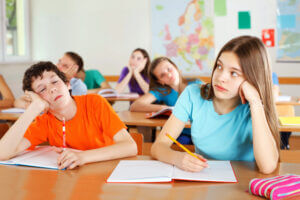 America’s schools, including Arizona’s, are stuck in mediocrity. Our academic achievement indicators trail 20 of our OECD peers in every subject. It’s not getting better, either.

It matters more than national pride. The US has fallen to tenth in overall economic competitiveness, our lowest rank ever. Stanford’s Eric Hanushek estimates the US economy would grow 4.5% more in the next 20 years if our students just performed at the international average level.

We have to import workers in fields requiring advanced degrees and outsource tech jobs to other countries. Employers struggle to find trainable applicants.

In 2018, before the Covid-inspired spending boost, the US already spent $16,628 per student, well over the OECD average of $10,759. Arizona’s all-source spending, documented by the Arizona Free Enterprise Club, exceeds $14,500 per student.

Other experts offer poverty and inadequate prenatal care as explanations for our achievement gap. But, again, living standards in the US are among the world’s highest. Prenatal care is provided to all pregnant women who are income-eligible, which included 42% of all births in 2020.

The causes of our systemic failure are more likely laid bare by the reaction found in an Arizona Republic article reporting that the BASIS schools had captured 10 of the 12 top spots in the ranking of Arizona high schools by US News and World Report. Since BASIS Schools, which have also topped many national rankings in recent years, are public charter schools, have open admissions, and may not require testing or charge tuition, this was an astonishing accomplishment.

You might normally assume that the media end education administrators would be eager to know the “secret sauce,” what BASIS does to consistently excel. But according to the experts quoted in the article, it’s all about race and privilege.

So says Tomas Monarrez of the Urban Institute, “those rankings are really a measure of prestige and prestige as we know it in this country is very intertwined with history, with race, with income.” Test scores can only reflect the quality of instruction “if the schools had the same student body.”

And indeed, seven of the top 20 public high schools are located in the wealthiest ZIP Codes in the state. The usual suspects, Asians and whites, are over-represented in the high-achieving schools.

But here’s a simple logic test. If wealth and privilege explain the superior performance of the top ranking schools why aren’t all schools in high wealth districts excellent? After all, the seven charter schools in well-off areas outperformed district schools with the same demographics. The other 13 schools in the top 20 weren’t even in wealthy districts at all.

Here’s a more likely explanation than skin color or “privilege.” BASIS, like all schools of excellence, is unflinchingly committed to high-level learning for all of its students. BASIS stresses rigorous requirements and high expectations.

Students take an average of 11 Advanced Placement courses with six required for graduation. Students, parents, and school staff are all expected to robustly participate in educating.

Critics contend that the schools’ high expectations are a de facto barrier for many public school students. But there is nothing inherently racist or discriminatory about high expectations. In fact, they are critical for underprivileged students to be successful, as has been amply demonstrated by KIPP schools, New York’s Success Academies, and others.

The wealth-and-privilege explanation for excellence is also belied by the example of Tolleson’s University High School. Many students come from working-class or immigrant backgrounds, but Principal Vickie Landis offers no excuses. On the contrary, “we pride ourselves on rigorous expectations and opportunities.” The school was ranked in Arizona’s 10 Best and was named the state’s only 2022 National Blue Ribbon School by the US Department of Education.

America’s education system structure is based on an outdated factory model, not suited to flexibility, accountability, and personalization based on consumer choice. Union-style work rules make excellence unlikely, despite many dedicated individual teachers.

But no more excuses. It’s hard to excel, especially with underprivileged students, but we can do better – and we must.