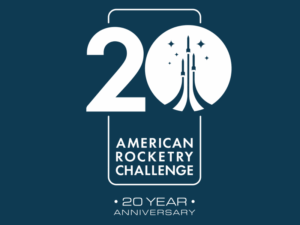 Or, “Where I’m Spending My Weekend for the 20th Year Running.” The American Rocketry Challenge is a nationwide event open to middle- and high-school-age kids, that has been going long before STEM was a thing. One day, a couple of decades ago, an executive of the Aerospace Industries Association (Boeing, Raytheon, those guys) called up the President of our little hobby group, the National Association of Rocketry. The conversation was something like, “We give out scholarships every year, and we’re really tired of reading essays. You guys have any ideas?”

Thanks to some very smart people in the NAR management, particularly retired Navy captain Trip Barber, here we are at the 20th anniversary of the aerospace industry’s flagship program to develop new engineers. Every year the challenge is different, but it involves designing, building, and flying a rocket with a very fragile payload (one or two eggs) to a target altitude (determined by an onboard electronic altimeter) and getting it back on the ground in a predetermined time. This year, two eggs, mounted sideways, and the vehicle has to have two separate diameter body sections. 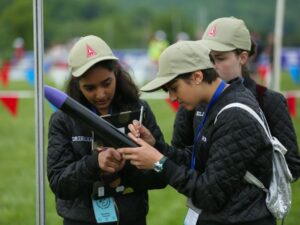 The contest is open to high school, middle school, homeschool, church, and Scout groups. Each team is given a local NAR member as a mentor. So many teams sign up that we had to limit it to two from each state, so 100 teams fly at the national finals in Virginia. The best teams spend months building, flying, breaking, fundraising, and learning. These kids work hard to get here.

Of the 100 teams coming to Great Meadow, VA, this weekend, the top 12 will divide up $100,000 in scholarships, and the first-place team will travel to London at Raytheon’s expense to compete at a major airshow. The top 25 teams will be offered slots in NASA’s Student Launch Initiative.

I have been one of the 150 NAR members who makes this event run every year, along with my son and daughter and future son-in-law. Fortunately, I can sit under a tent and work at Safety Check-In with the other grumpy old men. The enthusiasm from these kids charges my batteries every year. They are a hell of a lot smarter than I remember being back in the ’60s when I memorized every word of the Estes catalog. They are also more adventurous. When you have some time to waste, ask me about the team that decided the best way to fly their egg was to coat it with Marshmallow Fluff and put it in a balloon. They placed third.

If you happen to be in the northern Virginia area on Saturday, I encourage you to come to the Great Meadow equestrian park, see the exhibits that NASA and the aero companies put up, and watch the kids fly. They will start flying at 7 am, and each team has a preassigned launch window. After the contest flying is done at 3 p.m., there is demonstration flying as the results are tabulated. Spectators are most welcome. The officials will be wearing uniform hats and red shirts, and will be delighted to stop what they’re doing and answer your questions. It’s an amazing experience, and well worth your time.