I recently read a statistic that as of 2020, 4.5% of children in America live in motherless homes, while 21% live in fatherless homes. Obviously, as biology would have it, we all have fathers and mothers, even if in name only, in or outside of the home. You don’t really hear too much about that first group and the effects that has on children. I started to think of how my own mother grew up in a home without a mom back in the 50s. She was only 9 years old when her mom died. While my mom grew up in that first group, sometimes without the other parent present at all and in situations I still can’t fathom, I grew up in that second group. Also starting at age 9 and also not fun, but our mom managed to keep her three daughters in a home and in school. We were largely unsupervised and were latch key kids at very young ages, with responsibilities that parents today would be turned in to CPS for. I can say all the things about “how it made me into the person I am today” but I don’t wish that on any kid.

Although my mom was far from perfect, as we all are, she also knew she wasn’t a dad and never tried to be one. Probably because it was enough of a struggle to be a single mom in the 70s and beyond. Yes, she cut the grass and fixed appliances when they would break down and worked on her own car (a 1969 Chevy SS with a 396 engine!) but she did not try and father us. It’s impossible for one parent to fill both roles. I would call or send a card on Mother’s Day, and jokingly did the same on Father’s Day even after she was remarried. She was a child raised in an unfortunate situation, and despite that still decided to have children of her own, never planning on the other unfortunate situation that made her a single mom. Who would want to plan for that? Thankfully she had support from all of her older sisters while we were kids, and they stuck by her side with her adult children until the day she died. (I wrote about that time here.) Her grandchildren referred to her as Wonder Woman and that’s how we like to remember her.

I’ve now been a mother for 27+ years and this day usually comes and goes for me just like any other day. My own three daughters still show their appreciation for me on this occasion, but they do that every day anyway, so Mother’s Day has always made me a little “cringy,” if you will. I’m not really sure why, and it might be because of all the stuff you just read, but it’s right up there with Valentine’s Day on the list of holidays I don’t care too much about. This year has brought more cringe than usual. The memes and posts on social media about how maybe we should not celebrate our motherhood too openly, as to consider the feelings of others who don’t have their mom here any longer, and especially the feelings of those who cannot or chose to not become mothers. Don’t forget the ones who don’t have stellar relationships with their moms, either. The ironic topic of conversation this week about the “right to not have children” has just added to the cringe. So this year I decided to celebrate being a mom even harder. It’s a gift and a joy and it’s difficult at times and frustrating, especially when they are navigating adulthood. Oh, how I long for the pre-teen moody years these days.

So while everyone swears that they have the World’s Best Mom, I have posted “Every day is Mother’s Day” on my Facebook every year for at least 10 years, save last year when I took a lot of time off of that place after January 6th when people were so outraged while earlier supporting the fiery summer of love, as it were, and to avoid the gushing over the inauguration of who I knew then would be the worst president in my lifetime. But I digress. Anyway, this year I found a new saying that speaks to me: 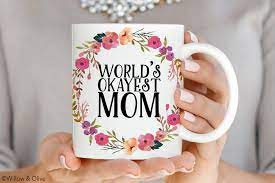 I’m definitely not the World’s Best, did not have the World’s Best, but am thankful to God who gave me the mom and the children He chose for me, and I will settle for Okayest. Now I’m off to drink coffee and eat cream puffs and eclairs with the World’s Okayest Children. Don’t forget to call your mom if you can, or even if you want to. :)

(Usually I add “Please follow me on Twitter” here, but I have been permanently suspended since November. First, for making a joke about bringing tarring and feathering back, and then for taking on the Chinese propaganda account. Maybe Elon will help me. Then again, my blood pressure has been great since last fall.)