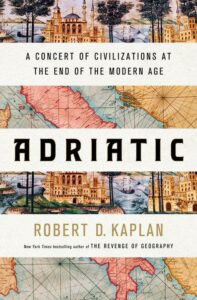 What is the dividing line between East and West? Where does the Western World end and the Orient begin?

“Adriatic: A Concert of Civilizations at the End of the Modern Age,” by Robert D. Kaplan, asserts the Adriatic Sea forms the dividing line. Kaplan explores the role played by the Adriatic from ancient times through the present day, examining its role as an interface between east and west.

“Adriatic” is part travelogue, part history, and part personal reminisce. Starting in Rimini, Italy, Kaplan takes readers around the Adriatic, working his way around the coast to Corfu in Greece. He stops at Ravenna, Venice, Trieste, two cities in Slovenia, four cities in Croatia, two each in Montenegro and Albania, before arriving at Corfu.

At each city, he examines its history, culture, and place in the modern world. He looks at local architecture and art, consulting with several residents active in the local art and literary scene. This includes discussions of famous nineteenth and twentieth-century western artists and authors who resided in those towns; Ezra Pound in Rapallo and Joyce in Trieste as examples.

In each chapter, he reviews the history of each place he visits. He examines its place in ancient and medieval history, shows how the boundaries between east and west shifted, and the role each place played. He also examines its place in the modern world and its potential future. This includes an examination of the effects of the Balkan Wars of the 1990s, and the current state of each country and city visited.

It examines the role he expects each place will play in the near future. Kaplan believes China’s Belt and Road system will restore the Adriatic’s traditional role as conduit between East and West. Just as Venice brought Eastern goods to Western Europe through the Adriatic during medieval times, Chinese investments in northern Adriatic pots will restore it to that role in the present.

Kaplan is a globalist. He believes China will become an enduring superpower and Russia will be restored to its prior superpower status, leading to a multipolar world. These views infuse the book. It was researched prior to the Covid lockdowns, and the changes it brought about. His predictions of Chinese and Russian dominance and inevitable Western decline seem potentially anachronistic in view of 2022 events. Regardless, “Adriatic” is a fascinating read, for its tour of the bordering polities, if not its prophecies.