I have to tell people about this. 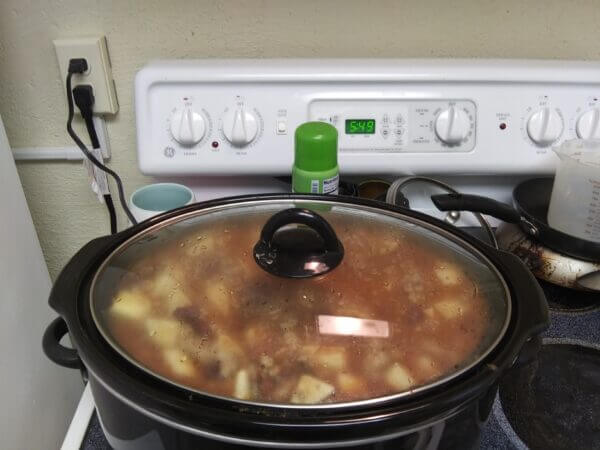 This started out as a “formal” recipe from Parade Magazine, over 50 years ago. I don’t make it exactly the same each time, it depends on what potatoes I find, and what size packages of ground pork… And the size of the crockpot, of course.

At that time, the recipe included I think a quart of water, so it originally was kinda soup-y. I prefer a thicker version.

With crock pots, it often comes down to the space available. Usually, I start with the amount of ground pork – just plain ground pork, not sausage. Some places only have ground pork with some basil etc, that’s usable if you adjust the other seasoning. But full-on sausage isn’t going to work. I’ve tried it. Blech.

But Walmart only had 1 1/2 lb packages, so I used two. This batch is probably the most sausage-y I’ve ever made. I did the rest of the recipe first with one package, then cooked the second package and added that to the crockpot.

Brown the pork, breaking it up into pieces as it cooks, and drain.

While the pork is cooking, I start working on the next stuff. Put a large can (28oz, I think) of whole peeled tomatoes into a blender jar, add at least half (4 qt) or one whole (7 qt) green bell pepper, cut into chunks; a medium onion (4 qt) or large onion (5 qt) or two medium onions (7 qt) also cut into chunks; garlic as desired, a tablespoon or more of Lawry’s Seasoned Salt (only Lawry’s for this), oregano, thyme… ground black pepper…

For a larger pot like my 7 qt, another small (15 oz) can of tomatoes is probably a good idea.

Family Dollar didn’t have canned whole peeled tomatoes, just “crushed.” So I used a can of that, and then a regular (15oz) can of diced tomatoes, chopped up a bit. All liquid included too.

But you wouldn’t do that with a smaller crockpot. Just the one large can of whole/peeled tomatoes.

Blend just enough to chop up the peppers, onion, and garlic. (If you prefer to fine-chop the onions/garlic/peppers separately, the blending is just enough to break up the tomatoes and mix in the spices.)

Depending on the capacity of your blender, for a large batch like mine the smaller can of tomatoes may need to be chopped up separately. Or they could be left diced.

Then, pour that mixture into the frying pan, with the drained cooked pork. Add some bay leaves as desired (some types are stronger than others). Simmer that mixture for a while to blend flavors.

Pour all of that into the crockpot, add 1 can (4 qt), maybe 2 cans (5 qt), or 3 cans (7 qt) of dark red kidney beans. Regular 15 oz cans. (Black beans could also be used, or even something like Garbanzos – aka chickpeas – but pinto beans are too soft. Maybe pinto beans could work if they went in dry.)

We always rinse all the cans with a little water too, and it all goes into the crockpot.

If using beans packed in juice/water, include that too. If packed in brine, they need to be drained and rinsed, then add a little water.

I’ve never added the quart of water from the original recipe, and I find the liquid that comes from the tomatoes, beans, and cooking out of the potatoes, is usually adequate.

I start out using high heat for a while, to get things going. Then, simmer in the crockpot until the potatoes are tender/done, and enjoy!

My preference is to have it with some good solid bread, or rolls.  Something that can be dipped without falling apart.