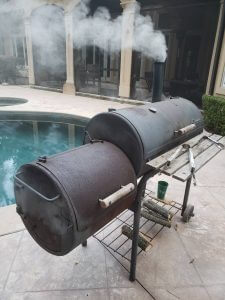 I enjoy grilling out.  In much the same way as I enjoy bourbon.  Sometimes I think I have a problem.  But that feeling passes once I have some bourbon and smoked pork.  I have three Weber grills (three different sizes – so that’s perfectly reasonable).  I have a large smoker that can handle around 40 pounds of pork at a time.  And then last year, my wife reminded me of why I love her so much:  “I saw a Big Green Egg on Facebook Marketplace.  Includes the rolling table and all sorts of accessories.  All that retails for nearly $3,000, but they’re selling it for $1,000 cash.  It’s only an hour away.  Let’s go get it!”

My beloved smoker was less than $200 at Lowes 20 years ago.  The Weber grills are cheap.  So spending $1,000 for a grill seemed, um, a bit extravagant.  The charcoal you have to use for it is $25 a bag.  On sale.  But I’m blessed to be sufficiently financially secure that $1,000 is not the end of the world.  So what the heck.  I went over and picked it up.  Well, my Dad and I and a neighbor kid who plays offensive tackle somehow muscled the thing up the ramps onto a trailer.  It weighs over 700 pounds.  So really, it’s cheaper than a Weber grill.  By the pound.  So that’s perfectly reasonable. 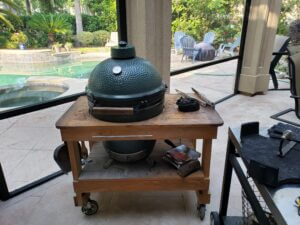 At first, I really wasn’t sure what to do with it.  Until a pharmacist friend of mine found out that I had it, and he was at my house that night to give me a tour of my new wondrous lifestyle accessory.  He enjoys his Big Green Egg the way I enjoy my bourbon.  And now, having used it for a year or so, I must say that I understand everyone’s enthusiasm.  It’s great for grilling steaks, baking pizzas, smoking chicken, and all sorts of other stuff.  Very cool gizmo.  Now, for $2,000-$3,000, I’m not sure.  A cynic might call that a waste of money.  But I would describe it at least as a glorious waste of money.  So grant me, at least, that I waste money well.  My government does not.

But when government wastes money, it’s destructive.  They ‘invest’ heavily in preferred companies, thus distorting the marketplace, making the financial markets less predictable, less efficient, and less profitable.  They give money to people, creating inflation and destroying the individual initiative that makes our economy work.  They pump free money into things like education and medicine, making everything they touch less efficient and more expensive.

When government wastes money, it destroys everything it touches.

With my Woodford Reserve and my Big Green Egg, I have at least cured myself of sobriety and hunger.  And I haven’t hurt anyone else.

That doesn’t mean that my Big Green Egg was a wise use of my resources.  There are cheaper ways to convert cold chicken into warm chicken.

But at least it wasn’t destructive. 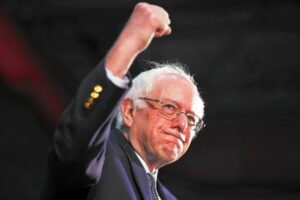 It’s that when our government inevitably spends our money unwisely on our behalf, they destroy our economy, our souls, and our liberty.

We should starve our government.  Force it to do with less.

We should discourage our government from wasting money.  And we should encourage our citizens to waste money.

This is important.  It’s more important than bourbon and barbeque.  And for me to say that, it must be very, very important.