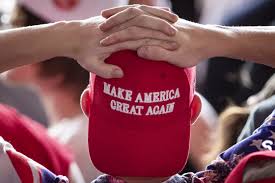 Sometimes we just have to listen.

White supremacy groups and belligerent parents at school board meetings are just a ripple in the ocean of Democrat paranoia.  Democrats have delusions and irrational fears that are much more disturbing than that.  Democrats fear the majority of their fellow citizens, that mass of pre-identified deplorables, former Tea Partiers and now, as identified by President Biden, those intransigent MAGA people.  MAGA!  People who cling to their bibles and guns, filled with righteous purpose and heavily armed.  People who just want to live their lives with a minimum of government coercion.

You know, dear reader, people who do not vote for Democrats.

MAGA people are embedded among our police and armed forces.  Biden administration initiatives have been underway from day one, designed to identify and purge these terrorists from our military.  Steps to control local police using federal funding leverage, civil rights prosecution, and Justice Department intervention have had marginal effect.  Defunding was tried.  Demoralization efforts (electing contumacious prosecutors for example) have had some effect, but backlash from the rise in crime has been vicious.  Federally controlled law enforcement, the Justice and Homeland Security Departments, and our national security apparatus, have all been repurposed to stop the MAGA threat.  So has the rest of the regulatory state.

These efforts, though, have not been very effective.  Despite them (or maybe in reaction to them) MAGA has been gaining influence.  Biden’s recent remark condemning MAGA is a tipping point for Democrats, an admission that they intend to take an even harder stand.

Here’s the playbook.  Three things must happen.  First, Democrats must shut these MAGA people up, that is control not just what they view and read, but what they say.  Enter the Homeland Security Disinformation board.  Next, Democrats must control the voting process so that elections can be “engineered” as necessary to provide the right result.  If this can’t be done at the federal level, it will require a coordinated effort at the local level, ala 2020.   And last of all, there is the nuclear option: MAGA needs to be criminalized.  If MAGA is criminal, the full power, reach and authority of the federal government can be used to identify, intimidate, dehumanize, surveil, disarm and, as necessary, jail the entire MAGA class.

That means anyone identified as a threat to them.  You, for example.  Forget about your rights to free speech, to bear arms, or of the press.  You are a criminal.

Of course, it’s for the planet, and as always, for the children.