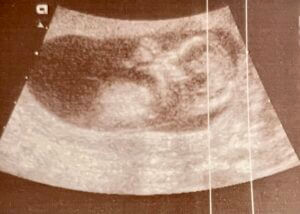 [13] For you formed my inward parts;
you knitted me together in my mother’s womb.
[14] I praise you, for I am fearfully and wonderfully made.

This grainy image was printed from the first sonogram of my oldest daughter, taken at 13 weeks gestation. It looks to me like she’s sucking her thumb, as babies do. By 13 weeks, I had already grown used to the idea of having a child, although the initial realization came as a shock. Doesn’t it always? I had plans: graduating from law school and applying for clerkships and taking law school exams without feeling constantly nauseated.

In the first few days of pregnancy, I did everything you’re not supposed to do. I ate sushi, drank wine, and had x-rays at the dentist. But the nausea and a bit of spotting alerted me to the life-altering reality of what was already happening inside my body. I took a pregnancy test before I even missed my period. I recall very clearly the feeling of my stomach stretching, even at 10 days pregnant, when I went to a wedding. The newlyweds had a “honeymoon” baby about a week before our daughter was born (on her due date).

Instead of studying for exams in solitude, I had a constant companion. I could feel the effects of pregnancy and the child developing independently of anything I was doing. I had to revise my plans. And my husband, whose job at a big law firm was already demanding, had a  new purpose driving him to succeed.

Almost 18 years later, our baby has grown into a talented and accomplished young woman. She and her sisters are certainly the greatest work of my life. I did finish law school, but I never did a clerkship and never actually practiced law. In creating and sustaining a family, I am doing something so much better. I am working to honor the lives that God so wonderfully made.