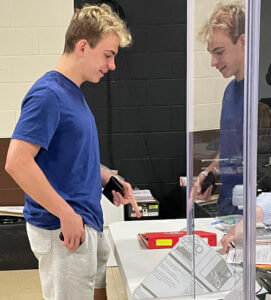 Within the last hour my youngest child exercised his right to vote for the very first time in the Ohio primary. At 17, he has the ability to vote on party choices for the November general election. He was the only under-age voter in our precinct to take advantage of the opportunity. The poll workers were thrilled to have a young man come into the voting station. Half of them were crushed to find out he was declaring as a Republican.

This fall he will vote absentee because he will be at King’s Point at the USMMA.

Before we went I quizzed him on the stances of the candidates and his answers showed he took this as seriously as I could hope for.