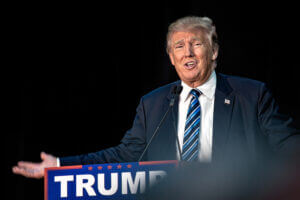 “Headwinds.” That’s a word you never hear when a Republican is in the White House. If anything goes wrong, from a stock market dip to your teen getting mono, it’s the malevolent intent of the creepy GOPer drooling on the Resolute Desk. But when a Democrat’s in office, the press praises Our Noble Hero for facing down those dastardly headwinds. Record inflation, an overrun border, or a murderous flight from Kabul — or all three! —  President Biden, Obama, et al., didn’t cause the problems. They’re passive observers responding to completely random circumstances.

Politico resurrected this term of art from their 2009-2016 archives and is now applying it to Slow Joe:

President Joe Biden and fellow Democrats have struggled to overcome historical headwinds and worrisome economic trends in the lead-up to the midterms.

So aides are scheming up something else: Turning the campaign into a contrast with Donald Trump and the Republicans.

President Joe Biden and his team are hoping to spend the spring and summer months drawing sharp distinctions with Republicans, one in particular. They still plan to push forth revived pieces of stalled agenda. But they’re also eagerly awaiting potentially explosive findings from the Jan. 6 select committee and hope those discoveries can inflame a battle brewing within the GOP over former Trump’s legacy and power.

That worked out great for Gov. Terry McAuliffe; might as well take it national.

Politico admits that Biden’s previous efforts to “reframe the conversation” have failed, but blamed that on being “overtaken by outside forces.” Poor Joe; always the victim. Who would have thought spending the country $30T into the red, scuttling oil production, and promising to tear down the wall would have Totally Obvious Consequences? Those outside forces are sneaky that way.

Biden aides have been delighted to watch growing division within the GOP, as House Minority Leader Kevin McCarthy (R-Calif.) has fended off bitterness within the ranks after a series of revelations about his critical words for Trump and right-wing caucus members after the Jan. 6 Capitol riot. Additionally, there is growing hope that the House committee investigating the insurrection may produce damaging findings against Trump and other key Republicans. The committee plans to begin holding prime-time hearings this June.

Biden advisers have also tried to game out this week the possibility of one particular October surprise. Elon Musk’s purchase of Twitter raised the chance that Trump could be reinstated to the social media platform, where he had more than 80 million followers before being banned in the wake of the Jan. 6 riot. Musk has said he would allow Trump to return, and while the ex-president has claimed he doesn’t want back on, the White House does not believe him.

About 20 percent of Americans are on Twitter. Maybe 25 percent have heard of Elon Musk. And Kevin McCarthy has, what, 5 percent name recognition? The average voters aren’t always-online Beltway wonks. They’re too busy working extra hours so they can pay their skyrocketing gas and grocery bills.